via: Crossroads to Change

"Crossroads to Change Campaign’s 17-Year Legacy to End State Inaction with Protection of Rights
Carole’s final analysis is that there is no enforcement of the law and there is a refusal to enact Revised Code of Washington (RCW) Chapter 71.05.520 that would have DSHS assign appropriate staff with authority to examine records, inspect facilities, attend proceedings necessary to monitor, evaluate, and guarantee dedication of protecting both Washington State and US Constitutional rights of people with mental disabilities."
The department of social and health services shall have the responsibility to determine whether all rights of individuals recognized and guaranteed by the provisions of this chapter and the Constitutions of the state of Washington and the United States are in fact protected and effectively secured.

To this end, the department shall assign appropriate staff who shall from time to time as may be necessary have authority to examine records, inspect facilities, attend proceedings, and do whatever is necessary to monitor, evaluate, and assure adherence to such rights. Such persons shall also recommend such additional safeguards or procedures as may be appropriate to secure individual rights set forth in this chapter and as guaranteed by the state and federal Constitutions.”   [1973 1st ex.s. c 142 § 57.]


"Due to a letter and request to Washington State Governor Christine Gregoire in early 2008, Carole Willey, a social justice activist & community organizer, Chair of CCC, received a letter from the Governor stating that she would assign David Reed, a staff person to work with Carole on these violations. With the documentation of the WA ST Mental Health Division finally acknowledging the “concerns,” the state agency agreed to forward his concerns to their Licensing staff, which they never did.
On July 10, 2008, Carole, along with witnesses Therese Holiday & Ann Clifton (two healthcare advocates), met with David Reed of the Department of Social and Health Services / Mental Health Division (DSHS / MHD). They met to review her analysis of the two reports and discuss violations of inpatients’ rights at Sacred Heart Medical Center in Spokane, WA."  more at :  Crossroads to Change
I found Carole Willey's website on July 8th, and immediately after reading the above, around 11:30 in the morning, I called Mr. David Reed.   Mr. Reed denied knowing of any instance or any history whatsoever of violations of individual's Constitutional Rights in the State of Washington in Involuntary Commitment proceedings; including my son's case from last summer.  However, I know this is a lie.  Recently, in "Constitutional Rights Violations Committed Under Color of Law in Washington State," I posted some email communications between staff members of Department of Social and Health Services,  Yakima County,  elected representatives and myself.


One of the emails I posted is dated September 1, 2010 and is from Ronald Moorehead to me;  it is cc'd to two State employees; one of them is the same David Reed, who like Mr. Moorhead, is an Administrator at DSHS/HRSA/DBHR and knows about my complaint.  He obviously knows Carole Willey; he sent her two letters on this subject, as she reports on her website.  In a letter she received from Governor Gregoire,  "stating that she would assign David Reed, a staff person to work with Carole on these violations." (emphasis mine)

I have since been in contact with Carole Willey, who has given me permission to post two letters from Mr. David Reed she received from him as a result of his being assigned to work with her by the Governor.  David Reed told me in our brief phone conversation that if I  had a complaint, he could give me the number of the person to call.  I asked,  "Do you mean Ronald Moorhead?"  To which he responded, "Yes."  I informed Mr. Reed I had Mr. Moorhead's number; but then, I know he knew that!  He also knew I had filed my complaint, since he was one of the people involved in not "resolving the issues."  I knew when I called Mr. Reed, that he knew about my son's case; and I suspected that he would lie when I asked him whether he had any knowledge that the department has a history of ignoring complaints about improperly obtained illegal Court Orders for Involuntary Treatment, and people's Constitutional Rights to Procedural Due Process being violated.  Unfortunately, I was right. He lied and said he had never heard of any such complaints... 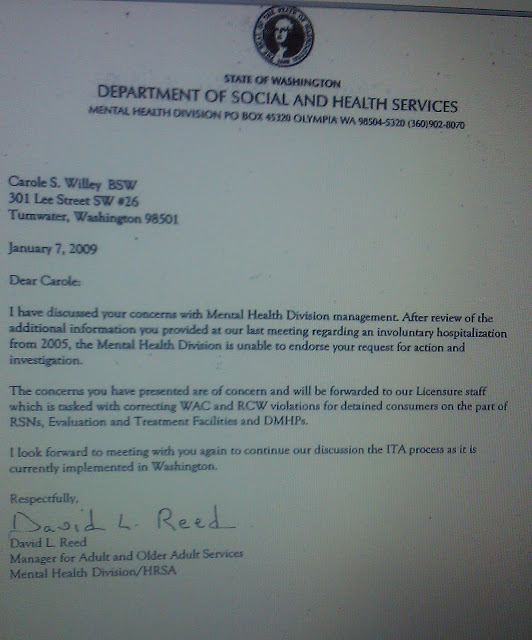 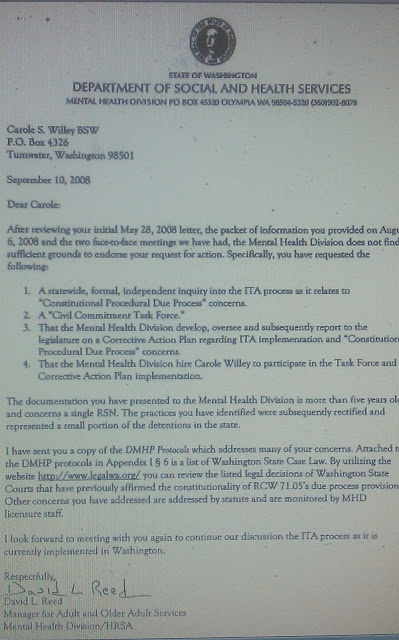 
The department's failure to do any investigation when these violations are reported, or to, "assign appropriate staff who shall from time to time as may be necessary have authority to examine records, inspect facilities, attend proceedings, and do whatever is necessary to monitor, evaluate, and assure adherence to such rights. Such persons shall also recommend such additional safeguards or procedures as may be appropriate to secure individual rights set forth in this chapter and as guaranteed by the state and federal Constitutions."  as the Washington State law requires in RCW 71.05.520


The Law is clear, DSHS has an obligation that it has failed to meet and actually has employees who take these complaints, DENY any DUTY whatsoever.  Mr. Moorhead advised me to file more complaints with other entities, while first denying the department has any authority to investigate; when in fact the department has a legal:

Every legally authorized representative of the State of Washington failed to perform their duty lawfully, thus far.  Federal Crimes were committed against my son by two people, because he has a "mental illness."   Once these crimes were reported, there was no investigation, and further crimes were then committed. (in a cover-up?)  The Federal Crimes committed violated my son's individual right's to Procedural Due Process under the United States Constitution, the right to be free of undue restraint, and the right to keep and bear arms.  These crimes were committed by employees of the State of Washington and/or it's duly authorized representatives; these  violations of my son's Civil Rights were committed


UNDER COLOR OF LAW

It is in vain, sir, to extenuate the matter. Gentlemen may cry, Peace, Peace-- but there is no peace. The War is actually begun! The next gale that sweeps from the north will bring to our ears the clash of resounding arms! Our brethren are already in the field! Why stand we here idle? What is it that gentlemen wish? What would they have? Is life so dear, or peace so sweet, as to be purchased at the price of chains and slavery? Forbid it, Almighty God! I know not what course others may take; but as for me, give me liberty or give me death!
Patrick Henry
feeling old this morning...