What can be done about medical research and pharmaceutical fraud? 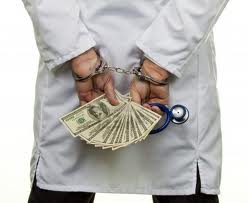 Carl Elliot in Attention trial lawyers: Your Ez guide to Suing a pharma thought leader, reports the untenable situation in academic medicine stating, "Medical school professors routinely lend their names to ghostwritten, pharma-sponsored articles which they did not actually write. This is fraud. Yet just as routinely, medical school administrators look the other way. The same goes for journal editors, research oversight bodies, and virtually everyone else in a position to stop the practice." (This has been going on for decades now) Elliott then asks, "What's left to be done?" He further reports how a couple of law professors, have determined that class action lawsuits could be brought under the RICO statutes against the academic researchers perpetrating fraud. Pharma recruits those who are willing to sell their "academic integrity" and "professional reputation" to market drugs based on unethically conducted research, that is unethically reported;  essentially, a corrupt marketing strategy. This type of fraud has resulted in the very real deaths of countless thousands of patients.


"Legal Remedies for medical Ghostwriting: Imposing Liability on Guest Authors of Ghostwritten Articles" is basically a step by step guide on how to, "Sue the bastards," which is desperately needed since it is obvious that academia's medical researchers and the pharmaceutical industry do not police themselves. It is equally plain that a lack of ethical integrity is ignored by virtually every entity with a duty to hold these "professionals" accountable. There is little to no investigation of questionable and even baltantly unethical conduct; no effort to protect the public, and apparently, no duty owed to the potential victims who will be harmed or killed.

Here are the Summary points from the PLoS article:

Citation: Stern S, Lemmens T (2011) Legal Remedies for Medical Ghostwriting: Imposing Fraud Liability on Guest Authors of Ghostwritten Articles. PLoS Med 8(8): e1001070. doi:10.1371/journal.pmed.1001070
Published: August 2, 2011
Copyright: © 2011 Stern, Lemmens. This is an open-access article distributed under the terms of the Creative Commons Attribution License, which permits unrestricted use, distribution, and reproduction in any medium, provided the original author and source are credited.
Funding: The research is supported by a grant from the Social Sciences and Humanities Research Council on The Promotion of Integrity in Biomedical Research. The funders had no role in study design, data collection and analysis, decision to publish, or preparation of the manuscript.
Competing interests: The authors have declared that no competing interests exist.
Abbreviations: RICO, Racketeer Influenced and Corrupt Organizations Act
* E-mail: simon.stern@utoronto.ca
Provenance: Invited; externally peer reviewed.