HISTORY AND PURPOSE OF PLANNING COUNCILS
These federal laws require states and territories to perform mental health planning in order to receive federal Community Mental Health Services Block Grant funds.
These laws further require that stakeholders, including mental health consumers, their family members, and parents of children with serious emotional or behavioral disturbances must be involved in these planning efforts through membership in the Council. here

Consumers, family members, parents of children worth serious emotional or behavioral disturbances are supposed to comprise half the membership on planning councils... There are 39 members and the vast majority of them are State employees, some are mental health service providers with a major conflict of interest--they make their living by billing Medicaid for mental health services provided to people on Medicaid.  Eleanor Owen,  represents NAMI Seattle and is a founding member of NAMI Washington. NAMI affiliates throughout Washington receive State, Federal, County and grants as well as being funded and advised by the pharmeceutical industry.

5. Carrie Huie-Pascua Community Member 3/1/2014 Was hired by Yakima County as the Director of Yakima Valley Systems of Care a SAMHSA Children's Mental Health Initiative grant project. Her job prior to this was the director of Benton-Franklin Department of Human Services. Immediately after quitting this job, she was appointed to be the consumer advocate representing Yakima County on this planning council. However, prior to her job with Benton/Franklin Human Services, she was Clinical Director at Nueva Esperanza one of the community providers for mental health services that Benton/Franklin Human Services contracts with. This agency had repeated irregularities with annual audits; in fact the agency was found to have committed fraud in the amount of $500,000 in  one 'irregularity.' The thing is, there is no way that Ms. Huie-Pascua could not have known about the 'irregularities' while employed as the Clinical Director at Nueva Esperanza.  The inappropriate billing went on for a while. As the director of Human Services for Benton/Franklin Counties, she was responsible for holding her former employer accountable, or at least stop the payments. If she was unaware, her lack of awareness is a strong indication of her unsuitability for being an administrator of a publicly funded program. Ms. Huie-Pascua, ethically speaking, would not be a desirable employee if she had been aware, yet failed to act; or unaware entirely. Both  scenarios could only be attributed to carelessness and/or negligence. In her role as the Director of Human Services, she recommended renewing Benton/Franklin Department of Human Services contract with Neuva Esperanza.  When she was questioned in regards to her ill-advised  recommendation, she claimed to be unaware of any "red flags" which would have prevented her making the recommendation. I don't find her claim credible at all. I'm still trying to figure out how she quit an administrative job unexpectedly, (just when the fraud $$ bomb was exploding) and within a couple weeks started representing Yakima County on a State committee as a consumer representative.  Within a month she was hired by Yakima  County as the director of the Yakima Valley Systems of Care. It seems orchestrated...

The picture is from The NAMI National Convention program that took place in Seattle at the end of June.  The reason I'm sharing it because it struck me how much and how little can be conveyed in a few sentences .  It is an announcement that four men have been given  new identities and learned skills which enabled them to do things, "by themselves."  Doing things by themselves doesn't include telling their own stories however...which is strange and disturbing. By the time I read that the audience would get a chance "to dialogue face-to-face" with them, I thought, "not nice at all, they are not an exhibit;" and wondered, "why they weren't important enough to acknowledge their accomplishments using their names?" 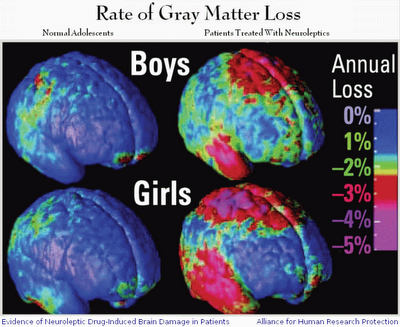 Evidence for the Neurotoxicity of Antipsychotic Drugs
22 State Employees