The investigation is OPEN.
It is a clearly a questionable decision to award a Federal Grant to a psychiatrist whose conduct has been under investigation by both the Office of Inspector General for Health and Human Services and the Department of Justice for quite some time.  It is simply unethical to award Charles Nemeroff a grant prior to the investigation being over.  That is exactly what has happened though. The investigation has been completed; but the DOJ has not announced whether it will be filing criminal charges or lettting Nemeroff off the hook.

The grant Nemeroff was awarded is to study the neurpsychobiological risk factors for post-traumatic stress disorder. Translation: Chuck is being paid to hunt down the evidence needed to declare  Post-Traumatic Stress Disorder is a neurobiological disease. ($$$ good!)

4 out of 5 psychiatrists recommend Ethic-Eze
IT'S NOT JUST FOR Ad Men any more! 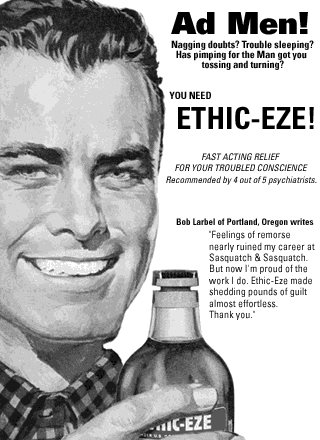 Ed Silverman's article and the comment left by 1Boring Old Man are a must read.  Ed's article and 1 Boring Old Man's comment lay out the disturbing facts about how Insel purposely minimized the egregious nature of Nemeroff's unethical conduct, then helped to secure him a faculty position at another public institution of Higher Learning, the University of Miami. By all appearances, unethical behavior was dismissed or minimized.  It appears that a plan for Nemeroff to avoid the consequences that NIH and Emory had laid out for his unethical conduct was planned and executed by the Director of the National Institutes of Mental Health, Thomas Insel, and the unscrupulous Charles Nemeroff.  One doesn't have to be a Rabbi to know that Nemeroff and Insel's unethical conduct destroys altogether the delusion that ethical integrity is valued by psychiatric researchers or valued by the Director of NIMH.

Ducktors Insel and Nemeroff are not even close to Kosher...