Psychiatric labels have the potential to cause a great deal harm. The labels are attached by social workers, psychiatrists, psychologists, therapists, nurses, teachers,  etc., etc...

A huge problem is the language of psychiatry is not a language of human acceptance and understanding; it is not a language that evinces having a positive regard for people in distress is highly valued. It is a language used to define symptoms of distress as differences, these differences are then used to diminish the status of the person. Diminished status leads to societal indifference; an unwillingness or an inability to acknowledge or even recognize the harm a diagnosis and/or the treatments can and do cause for some. The indifference is doubly harmful and commonly first manifests itself when a professional minimizes or ignores altogether the very real complaints of a patient; including complaints voiced about what in reality are iatrogenic injuries, the direct, adverse effects of the drugs...The adverse effects of the diagnosis are  lowered social/political power and status and the stigma of the diagnosis itself. The adverse effects of psychiatric diagnosis and treatment can effectively invalidate then effectively silence the person. This (de)voicing of a patient happens when a mental patient's complaints repeatedly fall on deaf ears, are characterized as a drug's "tolerable side effects," said to be, "all in the patient's head," or the complaints are attributed to the psychiatric diagnosis, a symptom of the condition the drugs are theoretically treating...e.g. medically neglected.

The names given to symptoms are the negative behaviors and/or undesirable emotions, are perceived to be 'bad' either by the patient, or someone else. Saying a person has a disease when a psychiatric diagnosis is applied is inaccurate at the very least; it is not based on any objective, medical finding, a disease, biological condition, genetic defect, chemical imbalance, or "neurobiological disorder," per se. Personal beliefs and educated, professional opinion/s are not empirical evidence that validate the disease hypothesis, without this empirical evidence, psychiatric disease is an illusion. The evidence for an underlying neurobiological disease causing "mental illnesses" may be just around the 'translational science' corner; but until substantive empirical evidence of a disease is found, it is merely speculation; it's not even a theory, since it's a hypothesis that has yet to be validated...


Proposed Changes to APA Guidelines
Principles of ethics and professionalism in psychiatry
Practice Domain 3.2
Central ethical and professional practices in psychiatric care
Topic 3.2.2 Honesty and Trust
Honesty and trust are elemental values of a profession. Honesty entails the “positive” duty to tell the truth as well as the “negative” duty not to lie or intentionally mislead someone. Derived from core principles of trustworthiness, integrity, and respect for persons, honesty and trust are fundamental expectations for the patient seeking psychiatric care.

Topic 3.2.3 Non-participation in fraud
Fraud is an action that is intended to deceive, and ordinarily arises in the context of behavior that seeks to secure unfair or unlawful gain. It is illegal, which violates a fundamental ethical principle for the profession of medicine (see Section 2). Moreover, because honest dealings are essential to the physician-patient relationship, any act of deception or misrepresentation compromises the psychiatrist’s ability to provide care.

Informed consent is an ethically and legally important process that involves information-sharing (e.g., about the nature of an illness and a recommended treatment) and knowledgeable and authentic decision-making about the individual’s health (e.g., by a patient or authorized surrogate). Informed consent for assessment or treatment is obtained if adequate information is disclosed, the patient is capable to make a decision, and does so voluntarily.

The doctrine of informed consent has evolved largely since the 1950’s. The legal standard for information disclosure, for example, continues to evolve and still varies by jurisdiction. Many states apply the “professional standard,” in which the amount and content of disclosure is determined by what most physicians traditionally disclose. Another standard, more consistent with an increasing emphasis on patient autonomy, is the “reasonable person standard.” This standard requires that physicians disclose what a reasonable person would want to know. Typically these standards include an accurate description of the proposed treatment, its potential risks and benefits, any relevant alternatives and their risks and benefits, and the risks and benefits of no treatment at all.

The field of psychiatry as a whole is attentive to the use of language and the interpersonal aspects of obtaining informed consent. The manner in which information is presented, the choice of facts that are included or omitted, and the selection of alternatives that are offered have distinct effects on patient choices. Distorting influences on the consent process may consequently arise from the simplest patient interactions. These include telephone conversations, cross-coverage, and curbside encounters in the clinical setting. Even language used in informal interactions with patients can carry the weight of professional opinion and is colored by the vulnerabilities of knowledge and power inherent to the patient role. When seeking consent, psychiatrists thus must be careful not to influence the patient unduly.

Adults are presumed capable of making their own decisions, with the clinical and legal burden of proof falling on those who wish to prove otherwise...Physicians maintain the highest standards of informed consent when they become familiar with, and endeavor to honor, the specific authentic and enduring personal values of their individual patients...

The duty to report unethical conduct is an essential part of a profession’s self-regulation. It is the members of a profession who are in the best position to recognize unethical behavior from their colleagues. When unethical psychiatrists continue to practice, they not only harm patients, but also damage the profession as a whole. They also harm future patients who may become reluctant to seek care. (emphasis mine) read here

Corinna West is a blogger at the Mad in America site, who wrote about being invited to the 2012 Carter Center Symposium on Social Inclusion.  In her article titled, "How I feel After the Carter Center Social Inclusion Symposium," she writes about the negative effects of the almost exclusive focus on the bio-disease model which is a tremendous hindrance to recovery.  She writes, "The root problem has a short and simple explanation: We’re labeling people with permanent illness who might have had temporary problems, simply an overwhelming of supports. Then we are giving them medications/drugs that might help some, but for many might be making the temporary problems into chronic problems. Then we have social supports that make it very difficult to leave this setup. All mental health people desperately need to ask themselves if this is working."

Ultimately, Corinna and a handful of fellow psychiatric survivors collaborated on a statement that was read  at the symposium by Dan Fisher.


This is a statement composed by 6 psychiatric survivors at the 2012 Carter Center Symposium on Social Inclusion. Dan Fisher reads it at the end of his panel presentation on Integrated Care and Wellness. The conference was highly focused on the disease model of emotional distress. This statement is about our concerns with the disease model approach and how it might be increasing stigma.

Many people in the audience doubted our quote saying Thomas Insel of NIMH has admited there is no genetic evidence for mental illness. The exact quote is right here, from JAMA. 2010;303(19):
"Where is the missing genetic signal for mental illness? The discovery that large (1 megabase) structural or copy number variants, such as deletions and duplications, are 10-fold more common in autism and schizophrenia is an important clue.3,4 Copy number variants are individually rare, sometimes restricted to a single family or developing de novoin an individual. Although "private mutations" are rare (reminiscent of Tolstoy's dictum that "each unhappy family is unhappy in its own way"), they are in aggregate remarkablycommon, spread across vast expanses of the genome, and ultimately could explain more genetic risk than common variants. "Although many of the genes implicated are involved in brain development, copy number variants do not appear to be specific for illnesses in the current diagnostic scheme. Within families, the same copy number variant may be associated with schizophrenia in one person, bipolar disorder in another, and attention-deficit/hyperactivity disorder in yet another. The genetics of mental illness may really be the genetics of brain development, with different outcomes possible, depending on the biological and environmental context." In OTHER words, it's not biologic, it' biographic.....

via Mad in America:
an excerpt:
So here’s the new plan: 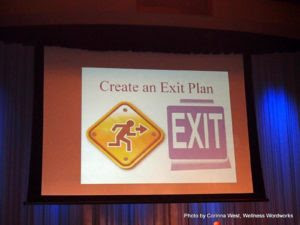 Peggy Swarbick showed one of the purposed of finding competitive employement
The way the internet and social media is changing the world, we really don’t need big money or big connections any more. The traditional powers need us, but we don’t actually need them. And that’s what I realized this week at the IT and entrepreneur conference I went to when I got home. It would be nice to have some of the $4.9 million that NIMH is giving Robert Gibbons to keep spreading statistical lies about antidepressants that increase teen suicides. It would be nice to get part of the $401,675 for each of 5 years that NIMH is giving Charles Nemeroff to prove PTSD is somehow (huh?) genetic. AFTER he was fired for non-disclosure of pharma payments, AFTER being suspended from a previous NIMH grant. It would be nice, even, if something actually happened to the suggestion that was made at the Carter Center symposium to include real and significant reviews and points for consumer/survivor involvement in NIMH grant activities.
read all of Corinna's article here
More on the harm:
Monica’s story: the aftermath of polypsychopharmacology at Rxisk