History does not long entrust the care of freedom to the weak or the timid.

[003]
WHEN THE BANKERS PLOTTED TO OVERTHROW FDR - 1933:
"It was a dangerous time in America: The economy was staggering, unemployment was rampant and a banking crisis threatened the entire monetary system.
The newly elected president pursued an ambitious legislative program aimed at easing some of the troubles. But he faced vitriolic opposition from both sides of the political spectrum.When Roosevelt finally took office, he embarked on the now-legendary First Hundred Days, an ambitious legislative program aimed at reopening and stabilizing the country's banks and getting the economy moving again.

Critics on the right worried that Roosevelt was a Communist, a socialist or the tool of a Jewish conspiracy. Critics on the left complained his policies didn't go far enough. Some of Roosevelt's opponents didn't stop at talk.

Though it's barely remembered today, there was a genuine conspiracy to overthrow the president. The Wall Street Putsch, as it's known today, was a plot by a group of right-wing financiers.

"It was a cockamamie concept," she adds, "and the fact that it even got as far as it did is pretty shocking."

The conspirators had several million dollars, a stockpile of weapons and had even reached out to a retired Marine general, Smedley Darlington Butler, to lead their forces.

"Had he been a different kind of person, it might have gone a lot further," Denton says. "But he saw it as treason and he reported it to Congress."

This is NOT an 'alleged' plot. And at some point, the corporate/banking coup d'etat of our government actually took place. 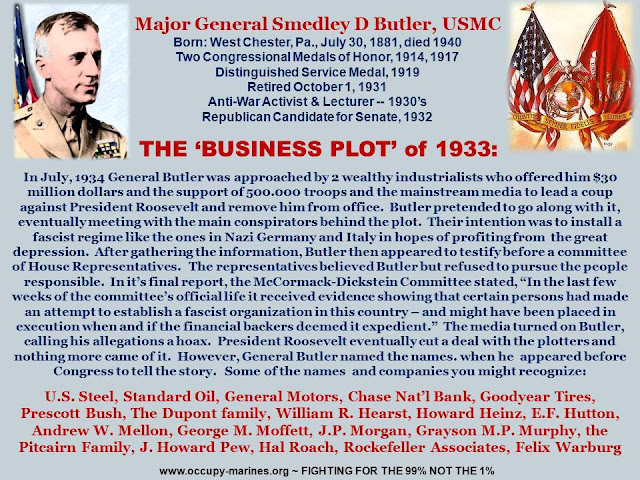 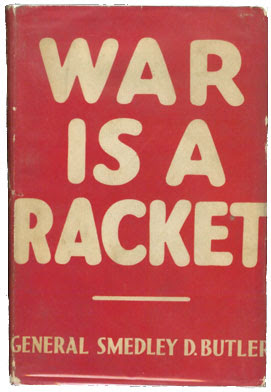 In a few selected quotes from War is a Racket he writes:

WAR is a racket. It always has been.
It is possibly the oldest, easily the most profitable, surely the most vicious. It is the only one international in scope. It is the only one in which the profits are reckoned in dollars and the losses in lives...
In the World War a mere handful garnered the profits of the conflict. At least 21,000 new millionaires and billionaires were made in the United States during the World War. That many admitted their huge blood gains in their income tax returns. How many other war millionaires falsified their tax returns no one knows...
Out of war nations acquire additional territory, if they are victorious. They just take it. This newly acquired territory promptly is exploited by the few – the selfsame few who wrung dollars out of blood in the war. The general public shoulders the bill...
And what is this bill?
This bill renders a horrible accounting. Newly placed gravestones. Mangled bodies. Shattered minds. Broken hearts and homes. Economic instability. Depression and all its attendant miseries. Back-breaking taxation for generations and generations...
...a war that might well cost us tens of billions of dollars, hundreds of thousands of lives of Americans, and many more hundreds of thousands of physically maimed and mentally unbalanced men.
Of course, for this loss, there would be a compensating profit – fortunes would be made. Millions and billions of dollars would be piled up. By a few. Munitions makers. Bankers. Ship builders. Manufacturers. Meat packers. Speculators. They would fare well.
Yes, they are getting ready for another war. Why shouldn't they? It pays high dividends...
The normal profits of a business concern in the United States are six, eight, ten, and sometimes twelve percent. But war-time profits – ah! that is another matter – twenty, sixty, one hundred, three hundred, and even eighteen hundred per cent – the sky is the limit. All that traffic will bear. Uncle Sam has the money. Let's get it...
Of course, it isn't put that crudely in war time. It is dressed into speeches about patriotism, love of country, and "we must all put our shoulders to the wheel," but the profits jump and leap and skyrocket – and are safely pocketed.

It has been estimated by statisticians and economists and researchers that the war cost your Uncle Sam $52,000,000,000. Of this sum, $39,000,000,000 was expended in the actual war itself. This expenditure yielded $16,000,000,000 in profits. That is how the 21,000 billionaires and millionaires got that way. This $16,000,000,000 profits is not to be sneezed at. It is quite a tidy sum. And it went to a very few...
Who provides the profits – these nice little profits of 20, 100, 300, 1,500 and 1,800 per cent? We all pay them – in taxation. We paid the bankers their profits when we bought Liberty Bonds at $100.00 and sold them back at $84 or $86 to the bankers. These bankers collected $100 plus. It was a simple manipulation. The bankers control the security marts. It was easy for them to depress the price of these bonds. Then all of us – the people – got frightened and sold the bonds at $84 or $86. The bankers bought them. Then these same bankers stimulated a boom and government bonds went to par – and above. Then the bankers collected their profits.
But the soldier pays the biggest part of the bill.
If you don't believe this, visit the American cemeteries on the battlefields abroad. Or visit any of the veteran's hospitals in the United States. On a tour of the country, in the midst of which I am at the time of this writing, I have visited eighteen government hospitals for veterans. In them are a total of about 50,000 destroyed men – men who were the pick of the nation eighteen years ago. The very able chief surgeon at the government hospital; at Milwaukee, where there are 3,800 of the living dead, told me that mortality among veterans is three times as great as among those who stayed at home...

So vicious was this war propaganda that even God was brought into it. With few exceptions our clergymen joined in the clamor to kill, kill, kill. To kill the Germans. God is on our side...it is His will that the Germans be killed.
And in Germany, the good pastors called upon the Germans to kill the allies...to please the same God. That was a part of the general propaganda, built up to make people war conscious and murder conscious.
Beautiful ideals were painted for our boys who were sent out to die. This was the "war to end all wars." This was the "war to make the world safe for democracy." No one mentioned to them, as they marched away, that their going and their dying would mean huge war profits. No one told these American soldiers that they might be shot down by bullets made by their own brothers here. No one told them that the ships on which they were going to cross might be torpedoed by submarines built with United States patents. They were just told it was to be a "glorious adventure."...

Butler proposed that the only way to actually prevent war is take the profits out of war. He proposed several ways to achieve this. What is important to note is that it is possible to take the profitability out of war, but it must be done at an international level. Taking the profitability out of war and out of the weapons industry is really the way that is most likely to be able to achieve some level of global peace. Of course there has never been any effort to do this in America, in fact the opposite is true, and right now the Bush administration is making war even more profitable, only ensuring its proliferation.
The General concludes by proclaiming:

TO HELL WITH WAR!

War is a Racket pdf via ratical.org