For My Son, The Age Of Consent Meant No "Informed Consent" 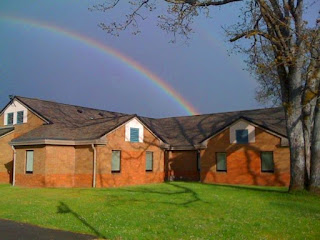 This post was posted mid December 2010 with a different title. It names the multiple drugs that my son was on in the two months before the date of the document, 10-8-2001.  I have also included a document where the research psychiatrist addresses my "concerns."  On December 31, 2011 I added the  paragraph on the discharge criteria and the TEOSS trial exclusions from ClinicalTrials.gov.


In Washington State a 13 year old can give consent for mental health and substance abuse treatment.  The thinking behind the law was that a teenager could obtain help that he or she felt was needed and not need a parent's approval.  I can see the logic in this.  I am so very aware of how this law was misused by the unethical doctors at the state psychiatric facility for children in Washington and doctors in our community once I brought my son home.

My son went to this facility in October of 2000 and turned 13 the following March.  In 2001 the Medical Director, a Federally funded researcher, had him on numerous drugs and when I protested, he told me I had no say!  Who was providing consent?  My lost son who could not hold a couple minute conversation; and often would not respond at all?  I know I never gave consent for any of what was done to my son.

It appears to me that this "researcher" was using my son in drug trials.  Obviously if he was, I did not give consent for that either.  Ultimately, shortly after the report below was written he put him on Clozaril, which to this day is not approved for use in thirteen year old adolescents.  By November of 2003 my son had tachycardia.  Still my protests went unheeded.  By November of 2004 his BMI was 34.3 and he weighed 246 lbs.  June of 2003 they added a trial of Abilify!  July of 2003 he was put on Depakote for aggression, not an approved use for Depakote..  January of 2004 Dr. Tom Semper lamented that Isaac had a QTC interval in the 440s which meant he couldn't be put on a trial of Geodon in addition to the clozaril, depakote, ativan, colace and miralax! 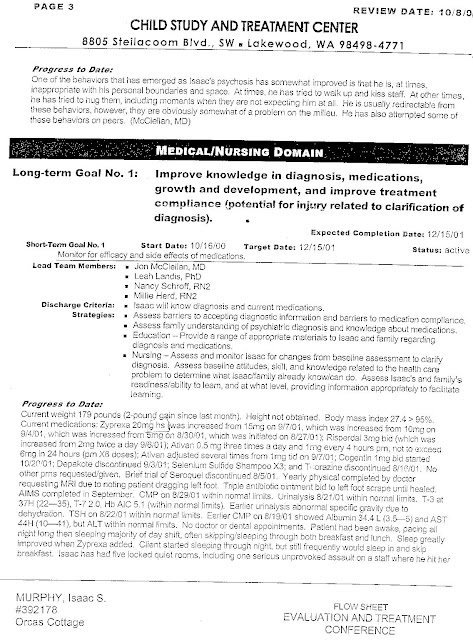 I know that during these two months this report covers, my son was given huge doses of many drugs which were not approved for use in children. I know that when I went to see him I was terrified for him. I know I was treated like shit when I dared voice my alarm at the horrifying deleterious effects the drugs were having on my son.  I thought my son was going to die; and now I know he could have.  The research psychiatrist acted like a thug not a doctor.  My son begged me to take him out of there the whole time.  I wanted to, because I know that what I saw was my son getting sicker and I believed then and believe now it was the massive amounts of toxic substances this man gave him--my son with a high IQ that loved to do so much and now...Remembers how he, "used to be able to do that."

In all reality I am truly stunned at the totally cavalier attitude about this sort of thing HOW THE HELL can the State of Washington justify letting this idiot keep his job??!!  Did the people of the State of Washington pay this man to do this?  All of us are familiar with the Hippocratic oath, which states, "First do no harm..." Well here is one that applies:


"Whenever a doctor cannot do good,
he must be kept from doing harm."
Hippocrates

Showing he had no need for Informed consent, here is the document from my first post, dated 5-3-04.  This is when he discusses on paper my "concerns" of course he fails to mention that I had in fact been protesting  since the summer of 2001.  Of course he doesn't mention that I had confronted him about not complying with the Ethics Guidelines for Informed Consent that he had written for The American Academy of Child and Adolescent Psychiatry. 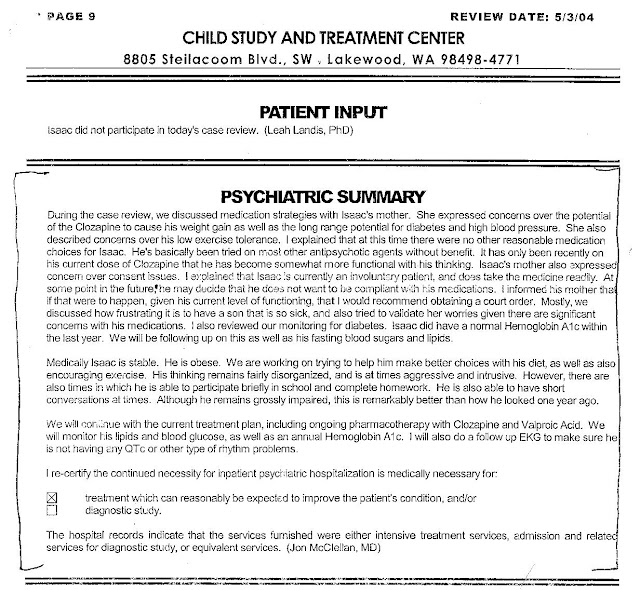 The fact of the matter is Informed Consent NEVER occurred.  And in this "Psychiatric Summary" he implies that my seriously ill son taking what is given him, is a sufficient substitute.  My son's taking the drugs constituted assent.  I know, as do all the medical staff at CSTC; my boy was coerced.  Informed Consent would need to be choice made based on the facts, and without being coerced. The facts about these harsh drugs were never told to me by this research psychiatrist; and I'm sure he never had a meaningful conversation with my son about the risks or the potential benefits.  I found out the facts when I researched on my own.  When I read the actual studies detailing the risk of death, iatogenic illnesses, and disability; I can not tell you the depth of betrayal I felt.  The fact is my "concern" was protest.  My vehement protests were met with derision and ridicule; then summarily  dismissed.  The psychiatrist researcher gave my son multiple harmful drugs that were not approved for pediatric use, and were not approved by anyone but himself.

This Discharge Criteria was on every single bi-monthly report/review---Never was I given any educational materials, let alone a "range of appropriate materials."  My questions were answered with insufficient information or were ignored.  The fact that my son had PTSD and Temporal Lobe Epilepsy a neurological condition which has the same symptoms of schizophrenia---the diagnosis of schizophrenia is suspect, the use of so many toxic drugs without permission is criminal.

This is absolutely shocking. Sounds like drug companies were behind the change in this law from the beginning. What parent "wouldn't" want their child treated for substance abuse issues? Is Washington alone in this or are there other evil States that do this?

I abhor that phrase "make better choices with his diet." Yes, they've put him on weight gaining drugs, then choose the food they serve to him, and then blame him for not being normal weight.

Rossa,
It certainly is suspect isn't it? This law was and is used to alienate parents and even exclude them from the treatment their chidren are receiving. The way it was used in my son's careby this facility effectively denied me my rights as a parent under the US Constitution. Not to mention my poor son who remembers this part of his life as being, "traumatized over and over and over." What is totally disgusting to me; staff actually bribed him with food!