"Joe Jackson was a Gila River tribal member who was mostly raised on the Yakama reservation community of White Swan.  At the age of 12 he came to live with his foster father, Shawn Marceau, a Blackfeet tribal member.  "He accepted me as his father and that's the way it came down," Shawn Marceau said.  Marceau, his father, grandfather and great-grandfather all served in the Marines, and soon after coming to live with Marceau, Joe began dressing up as a Marine in imitation of them."  from Daily KOS 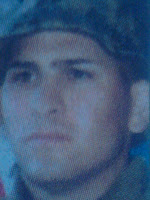 May Joe Jackson's family, friends, Tribe,
and his Brothers in the Corps,
be comforted in their grief.

Honoring the fallen is necessary--It is, in all reality, a Patriotic duty; one that must never go unfulfilled.

Regards to you and yours...
Becky