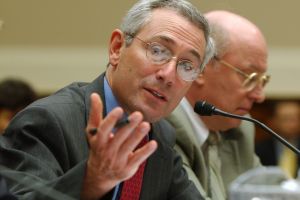 Dennis Cook AP Images
Thomas R. Insel, director of the National Institute of Mental Health,
shown here testifying before a House subcommittee, led an effort to strengthen
ethics rules for medical researchers yet helped a doctor known for not disclosing
his financial ties to drug companies get a new position.


Apparently, we Americans are expected to believe that people employed at the NIMH who have exhibited seriously poor judgement and outright unethical behavior, have the capacity to develop Ethics Guidelines to correct the serious lack of oversight and accountability in federally funded academic research.  Lack of accountability is the phrase that best describes Thomas Insel, Director of NIMH, and Charles Nemeroff.  Nemeroff, one of the worst offenders discovered to date, has yet to experience any negative consequences for his unethical behavior.  Instead of being held accountable, or experiencing negative consequences, Nemeroff is, according to NIH spokesman, John T. Burklow, being "granted full eligibility for agency activities" Burklow  said, and appointed to serve on "scientific panels reviewing grant applications."


It does not appear that either the NIH or the NIMH are taking federal administrator's, academic researcher's/federal grant recipient's dishonesty, conflicts of interests and lack ethics, seriously at all...

excerpted from The Chronicle of Higher Education:

"The Administrator, Thomas R. Insel, director of the National Institute of Mental Health, also encouraged the researcher, Charles B. Nemeroff, to apply for new NIH grants, even though Emory had agreed on its own to restrict Dr. Nemeroff from NIH grant eligibility for two years. The NIH also allowed Dr. Nemeroff uninterrupted eligibility to serve on NIH advisory panels that help decide who receives NIH grant money."


"Instead, the new NIH rules would require researchers only to give their universities more details of such outside payments, and require the universities to publicize both the money and their plans for mitigating its influence on science. The proposal contains no new penalties for researchers or universities that fail to comply. Past audits by the inspector general of the U.S. Department of Health and Human Services have criticized both universities and the NIH as insufficiently attentive to the problem. The latest inspector-general report, issued in November, recommended many of the changes ultimately outlined last month by the NIH. But the inspector general also called for more vigorous overall oversight by the NIH, and watchdog groups have suggested that the actual amount of energy spent by the NIH on enforcing its new rules will represent the critical unknown element in the regulations' ultimate success."


"An NIH spokesman, John T. Burklow, answering written questions about the matter, confirmed Dr. Nemeroff's full eligibility for agency activities and said he will begin serving this coming week on two scientific panels that review NIH grant applications, his first such assignments in two years. The NIH must "treat everyone equally unless they have been 'debarred' from funding," Mr. Burklow said.

"Mr. Burklow's response did not deal with other questions posed by The Chronicle, including a request for details of how Dr. Insel came to be named co-chairman of the NIH panel that wrote the new rules on financial conflicts of interest, and whether NIH policies should prohibit or restrict participation by researchers with a track record such as that of Dr. Nemeroff."  read  here.