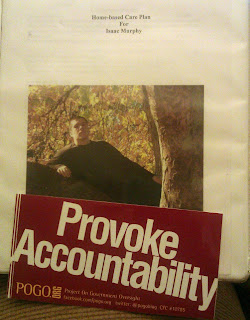 On the first of September I received the current CARE assessment for Isaac from the local Aging and Long Term Care office.  I am his care provider and his in-home care is funded by the federal Medicaid program.   Once again, I noted that the hours assessed are not the hours authorized.  I know that this is in fact illegal, done in defiance a Washington State Supreme Court ruling for the entire time I have been his provider.


In 2006 there was a lawsuit brought by people who received in home care through this program.  The lawsuit was brought by people who lived with their providers and were being denied some of  the hours of care they were assessed to meet their needs by the State of Washington because they lived with their care providers.  In May of 2007, the Washington State Supreme Court ruled that this practice was in fact illegal, that it violated Medicaid's comparability requirement in Jenkins v. Washington State Department and Social and Health Services.


I became Isaac's provider in December of 2008, after resolving an issue with the State of Washington that took just over two years to resolve.  The issue was the State of Washington  placed my name on a list of people who could not work in any capacity with children or vulnerable adults.  It took me two years to get an answer as to why my name had been put on this list.


The reason it was done I believe, is once he was a Ward of the State, the Federal Government paid a larger portion of the cost of his care.  Back to why my name was on this list.  I was put on the list once Isaac came home and his dependency was dismissed.  Once dismissed, the dependency that was illegally sought and obtained, was then falsely claimed to be due to "a founded allegation of abuse or neglect."  This was not true, and ultimately, in December 2008, I was authorized to be my son's provider two years and one month after first applying.


The entire time the State of Washington has been authorizing fewer hours than are assessed as needed for Isaac's care.  Every time I have questioned this disparity, I have been told it is because he lives with me.  When this current assessment arrived in the mail, last month, I called his case manager and told him that I know this practice is illegal and I requested that the hours assessed be the hours that are authorized; I was told that he did not have the authority to do that.  I told him that I wanted an explanation why the hours assessed are not the hours that are in fact authorized for payment, and he told me I would be mailed this information.


More than three weeks passed, with no information.  I again called the case manager to inquire about the information promised.  That was last Friday, today I received a letter which does not answer my question, "What gives ALTC the authority to authorize less hours than are assessed for my son's care?"  The letter that I received today in answer to this question clearly demonstrates that it is being done in violation of the Medicaid's comparability requirement; and in violation of the Washington State Supreme Court Jenkins ruling:

The letter explains how hours are assessed, but does not in fact say with what authority hours assessed are not authorized for payment.  The reason that is given on my son's assessment is that he lives with me, his care provider.  According to the Jenkins ruling this is not allowed.

¶ 28 Also, DSHS argues that the shared living rule is a valid part of their CARE assessment in determining the level of need for public assistance.   We agree that DSHS may use the CARE assessment program to initially classify, rate, and determine a recipient's level of need because this process is consistent with the Medicaid program's purpose.   DSHS violates the comparability requirement when it reduces a recipient's benefits based on a consideration other than the recipient's actual need.   A 15 percent reduction across the board for all recipients who live with their caregivers does not address, and in fact ignores, the realities of the recipients' individual situations.
¶ 29 Neither DSHS nor the study provides any explanation of how the 15 percent amount is derived from the study's data.   Furthermore, the study does not provide data to distinguish clients who are clinically complex from clients who are not.   In each case before us, the evidence  established that before any reduction, the hours required to provide for the needs of the individual plaintiffs greatly exceeded the hours actually reimbursed.
¶ 30 Once a person is assessed to require and receive a certain number of care hours, the assessment cannot be reduced absent a specific showing that fewer hours are required.   To “presume” some recipients need fewer hours of care without individualized determination violates the comparability requirement.   A recipient who does not live with a caregiver is assessed an amount needed for meal preparation, housekeeping, and shopping under WAC 388-106-0130.   Likewise, a recipient who does live with a caregiver should also be assessed with the same criteria for those same needs on an individualized basis.   The needs of a recipient are not presumed met without an individual assessment." (emphasis mine)
What all of this means is that the State of Washington continues to violate the comparability requirement of the Medicaid program, and has ignored the Washington State Supreme Court Ruling of Jenkins v. Washington State Department of Social and Health Services.
Final Note:  The dependency court ordered the State of Washington at the final hearing dismissing his dependency to do several things, none of the Court's Orders were followed.  One of the things the Department was ordered to do was to assist me in transitioning Isaac to the adult system, (including facilitating my application to be his care provider)  I was already a State Certified Care Provider and had partially supported myself while Isaac was hospitalized by working as a State paid care provider.
The CARE assessment tool used in Washington State is geared to assess needs of people with physical disabilities, not individuals like my son who are cognitively and/ or intellectually disabled, and in this respect, it is seriously flawed.