How to prevent and treat mental illness: Primum non nocere 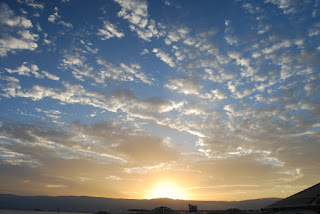 Sunrise over the Dead Sea, Israel

"Whenever a doctor cannot do good, he must be kept from doing harm."
Hippocrates

"Of all tyrannies, a tyranny exercised for the good of its victims may be the most oppressive. It may be better to live under robber barons than under omnipotent moral busybodies. The robber baron's cruelty may sometimes sleep, his cupidity may at some point be satiated; but those who torment us for our own good will torment us without end, for they do so with the approval of their own conscience."
C.S. Lewis


Calling mental illness a developmental brain disease, Thomas Insel, the Director of National Institutes of Mental Health, has stated, "One reason we haven't made greater progress helping people recover from mental disorders is that we get on the scene too late." I agree with this statement. I agree that was is labeled as "mental illness" is a "developmental" phenomenon; however, calling this phenomenon a "brain disease" when no disease has been identified--after decades of seeking evidence that a "disease" exists. This being the case, the root cause/s which lead to a person developing symptoms considered to be signs of "mental illness," cannot ethically be attributed to a biological disease, it's an unfulfilled wish that believers in the disease hypothesis cling to and state as if it is a fact...

Many symptoms of mental illness are known to be caused and/or exacerbated by environmental factors--- such as poverty, nutritional deficits, emotional, physical and sexual abuse and neglect, societal violence, and traumatic events, including natural disasters. These are major etiological factors for the emotional and behavioral symptoms of mental illnesses across the life span; it is foolish to not aggressively seek ways to prevent and treat mental illness based upon these identified factors. The biological disease paradigm of care adopted in the publicly funded mental health care system continues to disable people at an alarming rate; it does not effectively cure or enable recovery from mental illness. Nonetheless, the NIMH continues to invest a disproportionate amount of resources on biological treatments for mental illness; funding research in a desperate search for evidence that would validate the biological brain disease hypothesis.

Focusing on biological treatments to treat what essentially is the harm caused to human beings injured by not having physical, emotional and social needs consistently met, or injured by traumatic events; is obviously not working. It is not about who is to blame. It is about being brutally honest as individuals and as a society, and it is about being responsible. Responsible enough to accept the fact that how we treat our children, and how we treat one another throughout our lives is always important, regardless of a whether a person has a psychiatric diagnosis or not. However, how we treat one another is even more important when a person is in distress, people who have been given a psychiatric diagnosis are in need of compassion, in need of respect, and in need of assistance provided by people who accept them, without judging them.

The interpersonal conflicts within families and within society are the root cause of emotional and behavioral symptoms people develop. How we react and respond to people and to their symptoms, has the potential to exacerbate symptoms profoundly; our reactions and responses are determinate factors in how severe, entrenched, and lasting symptoms will ultimately become. Conversely, we can help people recover by providing the appropriate types of support and care they need when experiencing distress. Helping people to meet their own needs, we show people in distress they are valued and loved.

Treating symptoms once they occur will require a change in our thinking and a change in our behavior. First, we need to stop blaming people for the symptoms that make us uncomfortable. Perhaps our discomfort stems from our unwillingness to fully accept our own personal responsibility for how we have failed to do what we can or should be doing to effectively help. Individuals in distress are not different from people who are not; their symptoms are evidence of their human frailty, and should not be considered evidence of a genetic defect or biological weakness. The symptoms that seem strange due to our own personal discomfort, are merely coping strategies; in reality, they are a person's valiant attempts to process horrific experiences that have caused profound injury. Symptoms are evidence of injury. An individual has symptoms, but the symptoms are an outward manifestation of the harm sustained through interactions within families and within society.

All humans are the product of the interpersonal relationships within their families and within the social groups they belong to. How we interpret these interactions, the choices we make about how we think and what we do about positive and negative experiences, the meaning and the importance we attach to our experiences is equally important. To blame a person who has difficulty, label the person with a psychiatric diagnosis, claim the person has a disease in their brain, is to pretend their symptoms are phenomena arising from their biological makeup, and have little or nothing to do with the very experiences which in fact have caused them.

It may not be a simple cause and effect relationship, but it would be a mistake for us to believe there is no connection between how we treat people and whether or not they develop symptoms of mental illness. Perhaps denial is rooted in a mistaken belief that if one's behavior causes distress unknowingly,   blame must be assigned; this is a flawed perspective, without offering a solution. No one wants to believe they have caused or exacerbated a loved one's distress. As parents, we accept the responsibility for directly influencing and guiding the development of our children. Our children's success we have no difficulty attributing to having done a good job as parents. Why would we not also recognize that emotional and behavioral problems may be caused or exacerbated by our own personal parental and/or societal deficits? Individually and collectively, it is about responsibility; not blame.

We humans have a profound impact on one another, and to deny the possibility that our own personal deficits may be a causal factor or can exacerbate another person's symptoms of distress, is to deny the truth, and deny the help needed as well. Denial allows people to abdicate the responsibility each of us has to change ourselves while encouraging change within society for our own good. Our personal sense of responsibility must include being willing to be accountable for our actions which cause harm; truly listening and believing our loved ones who say they have been harmed. It is only our actions others see and experience. One's good intentions are not a justification; and should never be used as an excuse to deny or abdicate our responsibility for any harm our behavior causes others. All of us have caused harm unintentionally to people we care about, it is part of being human; it is unavoidable. Failing to be accountable once made aware, is to intentionally choose to cause further harm. By being accountable for changing whatever we need to in ourselves, with an awareness of the frailty of interpersonal human  connections, we can avoid repeating mistakes; effectively minimizing our risks of causing further harm.

By being self-aware, accepting responsibility for our behavior,
we can prevent and more effectively treat mental illness.