A whole lot of memories.  Here's one: 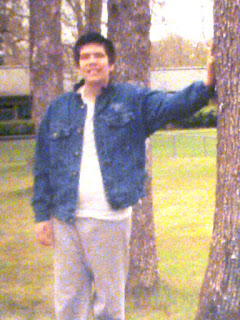 Isaac was fifteen when this picture was taken.  He is trying to smile, but can't due to rigid muscles--an effect of the drugs.  At close to 6' he would lose his balance and fall to the ground like a toddler; he's using the tree for balance.  He regained his footing over a long period of time.  When he came home in 2005, two years later, he still had balance issues: when leaning over to tie his shoes in a seated position, he would fall to one side.

Yesterday he cooked breakfast--perfectly.  He played a suduko hand held game for the first time in about a year on Friday--I can't do those...He also said, "I Love you too, mom" several times--he has, since he was young told me virtually every day--when he was home--that he does--in the last couple of days, he has added the 'too' every time; saying several times both Friday and Saturday, "I love you too, mom."

Becky,
I'm so glad to hear how the the little things are stacking up. It will only get better, trust me.
...Rossa
P.S. Nice looking young man!