The Department of Justice: The Office of Civil Rights Criminal Division does not conduct investigations

ON September 18, 2010 The US Justice Department employee J. Tucker signed for a package sent by overnight express. 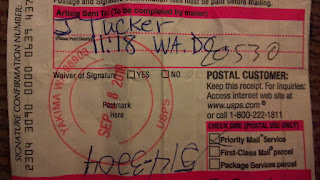 In the package was a copy of the entire Yakima County Superior Court Record for the Involuntary Commitment of my son, a copy of the entire record which was available to his attorney, and the entire record given to my son.  These three records should have been identical, but in fact are not; which is why I sent them along with the written complaint I filed on my son's behalf. Also included,  was a copy of the report I had filed with Yakima Police Department; I also added to the complaint that I had learned that Central Washington Comprehensive Mental Health had shredded all of the Original Court Documents; also a crime... I can only conclude that the documents were shredded because they were evidence of the crimes committed by two CWCMH employees, who were acting under the Legal Authority granted to them by the State of Washington.

I am living below the poverty level so the cost of obtaining and sending these records overnight was an expense I could ill afford--but what choice did I have?  The State of Washington has absolutely no interest whatsoever in investigating allegations of people who have a diagnosis of mental illness having their individual rights preserved or defended in Involuntary Commitment proceedings. The drugs used by psychiatry can cause iatrogenic diseases, permanent disability, and have fatal risks; I would think Due Diligence of Duty and Standard Court Procedures, Rules of Evidence, Proper Notice, Proof of Service, Effective Assistance of Counsel, would be required---they in fact are NOT needed in Washington State.  None of these elements which preserve an individual's rights were afforded my son. The State of Washington has no interest in actually investigating criminal complaints when it is  State employees or the State's authorized agents who are the alleged perpetrators.

When I contacted the local FBI office, I was told by the agent on duty that he could not take my complaint, that it would need to be filed with the Department of Justice in order for him to conduct a criminal investigation. This obviously allows time to cover up crimes... In effect, only the State itself can cause an investigation to be launched by State or Federal Law Enforcement when reports are filed in which the State's employees, or the State's contracted agents have allegedly committed Federal Crimes Under Color of Law violating the individual rights of a vulnerable adult...The State has a Conflict of Interest in that it is also liable when one of it's agents causes harm to a person or entity.

My son is physically ill for the third time in less than a year and a half.  He has ongoing damage being done to him and is medically neglected.  Most psychiatric patients with a diagnosis of schizophrenia are, IMO. Psychiatrists prescribe drugs that cause iatrogenic diseases, but they do not medically TREAT the diseases they cause. In my experience, psychiatrists will not make appropriate referrals to appropriate specialists either---unless badgered for months by a MadMother.  I am not ok with the utter failure of those who work for the State of Washington, salaried employees and elected representatives alike. Most disappointing is that fact that my district's elected Representatives, men I voted for, who have failed to do their jobs ethically or honestly; failed their duty to serve the public they have been elected to represent. All three men of these men have refused to respond personally to a single phone message or email. I have to say I am shocked by this.  Their predecessors all personally responded when I sought their assistance; and were helpful to me and my sons.

I am not ok with the the fact that mental health professionals violated the law, and my son's Individual Rights under the US Constitution.  I am not ok with the fact that their corrupt and unethical boss, the CEO of CWCMH, Rick Weaver, told me that the Yakima County Superior Court Clerk loses Original Court Documents all the time and that his mental health clinic shreds Original Court Documents that the Law requires be retained. He claims there's nothing wrong with shredding them, (and breaking the law) because he further stated, "we do it all the time."

Prior to mailing the package, I called the DOJ and was told the correct department to file the complaint with, and given the mailing address.  I was very specific about the nature of my complaint and I was assured prior to mailing the complaint, and after it was reviewed by the  Department of Justice Office of Civil Rights Criminal Division to call them if/when I had any more information.

Today I called with further information.  The person who took my call acknowledged that she had reviewed my complaint, and then asked me what information I had.  I told her I wanted to inform them that Jon McClellan, the unethical research psychiatrist hired as an expert by the GAO testified in a US Senate hearing on December 1, 2011, had in fact drugged my son into a state of profound disability in a Federally-Funded Drug Trial without Legal Authority; and without obtaining Informed Consent.  Jon McClellan did this in spite of my vehement protests. Jon McClellan repeatedly told me I had NO SAY in what he was doing to my traumatized child.

I reported he in fact helps formulate public policy for children in the custody of the State of Washington, and he advises other medical professionals around the State on how to drug children using neuroleptics off label. I reported that Jon McClellan has written numerous Practice Parameters, treatment guidelines and drug treatment algorithms which recommend using neuroleptic drugs off label in the manner being investigated due to rampant the Medicaid Fraud which continues to decimate the Medicaid budget. How many have been disabled and killed as a result is impossible to determine; the  data is purposely NOT collected. This fraud continues unabated in spite of three investigations and several multi-million dollar lawsuits...

Jon McClellan testified at a hearing that was part of the third US Senate investigation into the widespread off label drugging of foster children; but all children on Medicaid are at risk.  Neuroleptic and other psychiatric drugs are dangerous teratogens that cause serious iatrogenic illnesses and diseases, which can disable and kill. Everyone who takes them is at risk for these adverse effects; but children, adolescents and the elderly are particularly vulnerable. It is Medicaid Fraud whether a child is in foster care, or lives at home with their parents...When asked by Senator Tom Carper why so many children were being given these drugs off label, Jon McClellan claimed to have no idea why children are in fact being drugged in the manner he recommends.  Jon McClellan basically 'wrote the book' on drugging children off label.

I was then informed, we "don't investigate the type of crimes" that I had reported on my son's behalf "in this department."  What I want to know is, why ask for further information if there was not going to be an investigation? If my complaint was in fact in the wrong department, why was I assured when it was first reviewed, in September 2010 that it was? The DOJ's Office of Civil Rights Criminal Division had been sitting on this complaint for over a year when this conversation took place.

Believe me, it was quite a shock to hear that the Department of Justice Office of Civil Rights does not investigate Civil Rights Crimes committed against people who are diagnosed with a mental illness, Under Color of Law.  It seems this is discrimination based on disability. My son is identified as a vulnerable adult and he had felony forgery and perjury used as the basis for obtaining a Court Order to detain and subsequently used to obtain a Court Order to involuntarily treat him by mental health professionals.

The Deputy Prosecutor knew the testimony he offered the Court was perjured---he had to have realized after we spoke that the Affidavit offered by Nancy Sherman was fraudulent---I wasn't even aware of any Court proceedings, and certainly did not ask for these illegal proceedings to be conducted. In fact, both the prosecutor and my son's Assigned Counsel went along with this charade.  I had spoken at length to both of these unethical Officers of the Court; my elder son had also spoken at length with his brother's Assigned Counsel.  Nonetheless, in a hearing lasting ONE MINUTE AND TWENTY SIX SECONDS, a Yakima County Superior Court Order was sought and obtained placing my son under a court order for six months. If that isn't a criminal violation of my son's Civil Rights perpetrated UNDER COLOR OF LAW; I am Mary Freakin' Poppins!  The mental health and legal professionals who perpetrated these crimes all had an ethical, a moral and a legal duty to my son which they all abdicated with seeming impunity. In doing so, each of these "public servants" failed their duty to the Superior Court of Washington, failed their duty to the people of the State of Washington, AND utterly failed to preserve and protect my son's individual rights as required by both State and Federal Law. These "professionals" further traumatized a trauma victim and made other people and institutions unwittingly accomplices to their crimes.

Federal Crimes committed Under Color of Law; i.e. using the legal authority granted to mental health professionals, which are in effect, Police Powers; two mental health professionals, and two Officers of the Court broke several State and Federal Laws when they violated my disabled son's Constitutional Rights; and caused him grievous harm. This is NOT the kind of crime the Office of Civil Rights, Criminal Division investigates...This outrageous claim was made over a year after the I had been informed the complaint I had filed on my son's behalf had reached the correct department; and that it would be investigated.


The appearance of Justice and Justice itself is absent.
My "American Experience" has been a fucking nightmare. 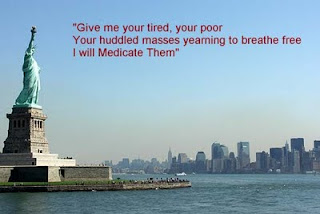 Lou Reeds boulevard song goes
"Give me your hungry, your tired, your poor I'll piss on 'em
That's what the Statue of Bigotry says
Your poor huddled masses
Let's club 'em to death
And get it over with and just dump 'em on the boulevard"