What was once an illusion is now delusion 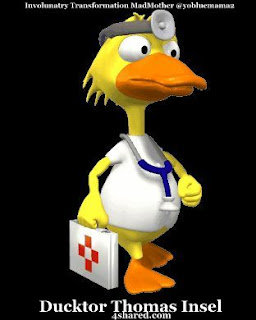 Unruly Kids May Have a Mental Disorder

"ScienceDaily (Apr. 29, 2012)  When children behave badly, it's easy to blame their parents. Sometimes, however, such behavior may be due to a mental disorder. Mental illnesses are the No. 1 cause of medical disability in youths ages 15 and older in the United States and Canada, according to the World Health Organization.

"It's also important to understand that mental illnesses are a developmental brain disorder even though they can look like behavior problems," Dr. Insel explained." read here

Thomas Insel, has been the front man for an effort to maintain the charade that psychiatry is an ethical medical specialty that treats actual diseases. Apparently, the "Stay the Course" agenda of treating emotional and behavioral difficulties children and adults experience as if the difficulties are symptoms of an unidentified "brain disease" requires no actual evidence. Without definitive evidence supporting the disease hypothesis, it isn't even a theory, let alone a scientific finding or medical certainty. Insel's statement is merely an unsubstantiated belief; a belief that belies understanding of the existent "evidence-base" and ethical medical principles. Insel is entitled to his opinions, but it is irresponsible and ethically unacceptable for him to share his opinions when being interviewed in his official capacity as the Director of National Institutes of Mental Health. The fact that his belief is shared by others who are convinced that the discovery of evidence that will vindicate their belief is right around the translational science corner, Insel's statement compounds the potential for confusion about what is and is not known about etiology of psychiatric diagnoses. Insel's lack of judgement in voicing his personal opinion, in effect, seems to confer a patina of scientific validity to a belief.

Firmly held beliefs and shared opinions are no substitute for empirical evidence; shared beliefs and opinions  do not imbue the standards used in psychiatric clinical practice with validity, safety and effectiveness. Absent the scientific evidence that is (theoretically) required in order for a diagnostic criteria and treatment protocol to be considered a valid, ethical, medical standard; mental illnesses have been declared by psychiatric decree to be caused by disease and/or defect, and treatment standards are developed using the same quasi-democratic process of consensus; becoming standards simply because they have been decreed to be standards by psychiatrists.  Psychiatry "validated" diagnostic and treatment standards with a quasi-democratic process, i.e. a vote taken by psychiatrists. If one carefully reads these standards and protocols it is apparent that empirical evidence is often not cited in support of the conclusions; empirical support is required to comply with and conform to ethical scientific and medical principles. The primary basis of psychiatric diagnoses and treatment protocols designated as standards of care for use in clinical practice is consensus; i.e. evidence of agreement. Agreement is no substitute for empirical evidence; consensus does not support or verify diagnostic and treatment validity, reliability, safety or effectiveness. Consensus cannot quantify risks to patients.

Psychiatrists have been perpetrating fraud. Shared beliefs and opinions have been substituted for empirical evidence. Conviction that one's beliefs are valid is not empirical evidence of the validity of a hypothesis, nor is it a justification for psychiatry abusing it's medical authority or violating the trust of patients and families in the misguided notion the foundation of psychiatry's standards of care could be supported and validated by beliefs and opinions. More importantly, how does a conviction that one's beliefs and opinions are valid cause an individual, let alone virtually an entire medical specialty to justify using deceit, fraud and coercion to manipulate patients, to misinform and manipulate parents and others to be complicit in manipulating, controlling and coercing patients into being "treatment compliant?" Psychiatry has been using fraud, a crime, to implement and enforce an unethical standard of care in order to "medically treat" unidentified metaphorical diseases. This is not an ethical, medical practice obviously; nor is it done with an altuistic intent to serve a patient's best interest. Fraud is never used to benefit those who are being deceived; this fraud has been used to implement and enforce what psychiatry claims is "necessary medical treatment" for children and vulnerable adults diagnosed with mental illness for decades. Some are compelled under Court Order if they are unwilling to submit to psychiatric authority, which belies the claim that necessary medical treatment is what psychiatry provides, When did deceit, fraud, and coercion; outright criminal behavior, become acceptable methods to use in the practice of medicine?

The fraudulent claim is used in standard clinical practice to coerce patients and parents of children who are patients into believing there is a disease which requires psychotropic drugs to treat it. It is a fraudulent claim meant to convince patients and parents of children, of the necessity for "treatment compliance." It is used in order to perpetrate fraud.  A claim that is not based on facts used in the hope that if believed, it will modify a person's behavior and gain their cooperation, is by definition, a fraudulent claim, This particular claim is used specifically to convince adult patients, children, youths and their parents to comply with psychiatric treatment. People who believe the claim and comply with psychiatric treatment have, more often than not, sustained iatrogenic injuries; some have been disabled or killed by the direct adverse effects of the drug/s they were prescribed. How many patients and their families have been misled, and were never warned about the well-known adverse effects, iatrogenic injuries and diseases that are well-documented intrinsic risks of the drugs they are prescribed?

I know from pain-filled experience that when these risks become actual injuries, psychiatrists will often claim the drugs do not cause the brain damage and other iatrogenic injuries; many will declare that even obvious iatrogenic injuries are simply symptoms of the psychiatric diagnosis itself.  I can assure you, as the mother of a victim of psychiatric abuse and torture, my agony is, at times unbearable, I know my son was intentionally victimized by dishonest, unethical psychiatrists who lied repeatedly, psychiatrists who abused their authority and power and used the disease hypothesis as an excuse to justify medical malpractice. Treatment not supported by evidence of safety and effectiveness is human experimentation; and it is an accepted practice in the standard of care used in clinical psychiatric practice. Every psychiatrist who treated my son, particularly the lead researcher for childhood schizophrenia, Jon McClellan, intentionally perpetrated fraud in their (mis)treatment of my son. A belief that my son's symptoms were evidence of an underlying disease, is not actual evidence---this now familiar metaphor is simply an intrisic part of the fraud being perpetrated by psychiatrists,  My son is neurologically and cognitively impaired; he has been victimized repeatedly in effect, he was tortured by psychiatrists who acted with impunity. Every single one of the so called doctors who (mis)treated my son knew he was a victim of horrific abuse; and every single one of them knew he had severe PTSD and Left Temporal Lobe Epilepsy as a result.

This new program that Thomas Insel is marketing, is the same old progrom.  It is certainly no way to regain lost credibility; absent ethical integrity, the psychiatric profession will continue to lose credibility for failing to be accountable for the harm psychiatric diagnosis and treatment causes. Stating this particular claim with authority when psychiatry still does not have valid and reliable diagnostic criteria, is unethical; and it is entirely irresponsible without definitive evidence an actual disease even exists.  In effect, Insel is claiming that without duplicable, reliable i.e. valid, data; that psychiatric diagnoses are in fact the result of an unidentified, and incurable pathology that has not yet been found.  This is nothing more than an attempt to use his authority and pseudo-scientific sounding terminology to continue to market the same old illusion that psychiatry is treating actual medical diseases. In truth, the drugs psychiatry uses cause diseases that psychiatrists then medically neglect; increasing the risks for iatrogenic disabilities, and decades early sudden death, which is in truth, homicide.  Insel apparently believes that psychiatrists can practice ethical patient-centered medicine without valid diagnostic criteria, and without relying on empirical evidence as the evidence-based foundation for practice parameters, treatment protocols, and standards of practice.

Psychiatry isn't "evidence-based medicine." Without evidence, i.e. valid research data that supports and validates reliable diagnostic criteria, the treatments provided, and the standards of care used; it is evident that psychiatry does not value using sound ethical medical judgement or obtaining informed consent from patients. To some psychiatrists, these are not ethical duties performed, but affectations that are barely paid lip-service.

Primum non nocere.
What was once an illusion is now delusion.