Report Details What Should Happen When Scientists at FDA Disagree 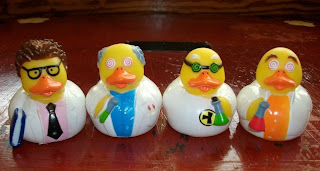 via the Union of Concerned Scientists:

New Report Details What Should Happen When Scientists at FDA Disagree

Should scientists at the Food and Drug Administration be able to have honest disputes with their colleagues about the science behind a drug or medical device approval decision? Or should they keep quiet about their concerns, preferring not to rock the boat?
Encouragingly, a government report released today details steps the agency will take to allow the FDA staff who work on medical devices to better resolve scientific disagreements.  But sadly, I fear that the pressure to fast track drug and medical device approvals may discourage researchers from voicing dissenting scientific opinions.
There’s certainly a lot of work to be done. A recent UCS survey of FDA scientists found that 244 respondents (including 39 scientists at CDRH, the FDA’s Center for Devices and Radiological Health) felt they could not “openly express any concerns about the mission-driven work of their agency without fear of retaliation.”
That’s no surprise. In the past, we have seen scientific disputes ruin careers. We have also witnessed cases—like Vioxx—where reviewers who raise concerns about a drug or device’s safety and effectiveness face threats and retaliation.
Today’s ReportIn October 2009, CDRH put forward new policies and procedures for taking care of scientific disagreements among staff related to regulatory decisions. The Department of Health and Human Services Inspector General (IG) was asked to evaluate the effectiveness of the new policies and procedures.

An FDA engineer measures the magnetic fields emitted by a magnetic resonance imaging simulator used in testing MRI compatible medical devices. Photo credit: Food and Drug Administration
The IG found several challenges regarding implementation: the disagreement documentation and resolution process, awareness of employees on the policies and procedures, general confusion about regulatory definitions and processes, and “staff perceptions about expressing differences of opinion.” He recommended that FDA better train reviewers and managers, better define of the process for documenting and resolving scientific disagreements, and better define who is responsible for adequate documentation.
Other Improvements Regarding Scientific DisagreementsThe FDA’s new scientific integrity policy also takes some steps forward in resolving dissenting scientific opinions. The policy contains the following language:
“Scientific Dispute Resolution at FDA” (Staff Manual Guide (“SMG”) 9010.1) requires the agency’s organizational units to establish processes for resolving scientific disputes. These processes must include, among other things: key messages that employees are encouraged to voice scientific disagreements and that they are protected from retaliation and repercussions for raising such disagreements within their organization; a requirement that the head of the organization render a written decision if the dispute cannot be resolved at a lower level; and appropriate timeframes. The agency-wide SMG also provides a mechanism for employees to elevate scientific disputes to the Office of the Commissioner. An Agency Dispute Process Review Board, chaired by the agency’s Chief Scientist, is then responsible for conducting full and fair evaluations of the disputes to evaluate whether the appropriate processes were followed, whether the decisions made were based on consideration of all relevant evidence and views bearing on the scientific question at issue, and whether the initiating employee was provided an opportunity to express his or her concerns at all appropriate levels.
This is strong language. The policy should go even further, however, by requiring the documentation and public disclosure of dissenting opinions so that we can understand all of the science that was relied upon in making a drug or medical device approval decision. Our line-by-line analysis of the FDA policy is here.
Read the rest here: New Report Details What Should Happen When Scientists at FDA Disagree

photo via sweetmelissa50 on photobucket