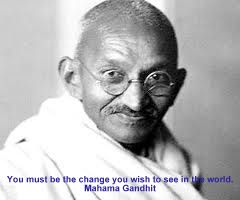 MC Yogi: The Gandhi Rap – be the change u want to see


JANUARY 30-APRIL 4, 2013
Commemorating the Season between Mahatma Gandhi and Dr. Martin Luther King, Jr.’s assassinations. Over 900 cities around the world, coming together to build awareness and action for peace.
Dr. Arun Gandhi
Mahatma Gandhi’s grandson
President of Gandhi Worldwide Education Institute
Be Magazine | www.bemagazine.org
The 64-day Season for Nonviolence was conceived as a period when people would make an attempt to “Become The Change” in the world. A sort of a “retreat” where you go to hone your skills and then come back to help others understand better.  In order to ”Become the Change”  one has to be committed to face the demons and transform them into strengths.  This can be both a personal and group activity.  The personal commitment is about self-realization.  The group commitment is to strategize about how to take what you have learned into the wider community.  Check it out here