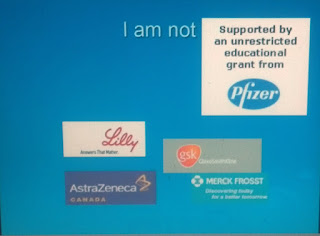 via Ictv Victoria:
Are we over-medicating ourselves and our children? Drug policy researcher Alan Cassels discusses the drug industry; the methods and practices on how they operate and he questions whether or not we need to take as many prescription drugs as we are lead to believe for that 'quick fix' in our lives.

FOR A LOT of people, their health is defined, in part, by a number. What is their cholesterol level? What is their body-mass index? For those with concerns about osteoporosis, there’s a “T-score”, which measures bone density. Most recently, there was a flurry of news reports about PSA tests, which calculate levels of a prostate-specific antigen.

On the upside, Cassels says the Pap smear is the test that saves the most lives and is backed by the best science. “Cervical cancer is something you can detect early,” he states. “You can do something to change the course of the disease. And what you do is not going to have other serious side effects.”
In his book, he also explores eye exams, mental-health screening, and genetic testing. Readers discover that sometimes, these tests convince physicians to take action that can cause more harm than good.
A classic example is the PSA test, which helps doctors diagnose prostate cancer. Earlier this week, the United States Preventive Services Task Force published a paper in the peer-reviewed Annals of Internal Medicine recommending against this screening method for asymptomatic men of any age.
“Strong evidence shows that PSA screening is associated with significant harms,” the USPSTF stated. “Nearly 90 percent of men with PSA-detected prostate cancer undergo early treatment with surgery, radiation, or androgen deprivation therapy. Evidence shows that up to five in 1,000 men will die within one month of prostate cancer surgery and between 10 and 70 men will survive, but suffer life-long adverse effects such as urinary incontinence, erectile dysfunction, and bowel dysfunction.”
It’s a recommendation that Cassels agrees with. “The fact that one of the biggest organizations in the U.S. that advises on screening is giving a major thumbs down to one of the most popular forms of cancer screening—this is a pretty big deal,” he says. “It’s been in the works for a long time. I totally agree with it because they’re finally recognizing that when you quantify the benefits and the harms, you’re helping very few men by screening them for prostate cancer.”
He adds that there’s a difference in the way prostate cancer is often treated in the United States, compared with in this country. “In the U.S., it’s really seen to be a serious moneymaker,” Cassels says. “You’ve got hospitals and cancer centres buying these big robots—these high-tech $5-million robots—and then they market this as the cleanest, best way to get your prostate removed.”
He bluntly writes in his book that “urologists have an unavoidable conflict of interest regarding PSA screening because…so much of their work depends on treating prostate cancer when they see it.” Therefore, he suggests, it is hard for them to be critical of these tests. However, Cassels points out that studies have demonstrated that men whose prostate cancers are revealed through these diagnostic examinations do not live longer than those whose cancers were discovered in other ways.
One of the more entertaining sections of the book concerns self-screening for diseases over the Internet. He reports in the book that pharmaceutical companies sometimes put simple tests online with the goal of encouraging people to see their doctor to receive more tests. The ultimate objective is to sell more prescription drugs.
“You can imagine [Straight sex columnist] Dan Savage giving you a test with five questions to see if you’re sexually repressed,” Cassels says with a laugh. “It’s easy to answer ‘yes’ to several of the questions. In the case of a lot of these tests, the punch line is see your doctor, who would order a screen or prescribe a drug, right?” here