He is a poor son whose sonship does not make him
desire to serve all men's mothers.
~ Harry Emerson Fosdick

Mothers are the necessity of invention.
~ Bill Watterson 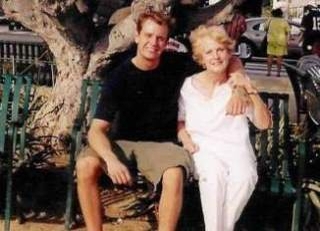 I have another petition up in the upper right hand corner, the same picture of Mary Weiss and her son Dan Markingson as above--the text of the petition is below...

Carl Elliott, a bioethics professor at the University of Minnesota, has done a tremendous amount of work attempting to get regulatory authorites to perfom their ethical and legal duties, to investigate and hold accountable the unethical professionals who failed Dan Markingson.  read his post about the petition here
my comment: The ethical failures and medical negligence of doctors Schultz and Olsen are the proximate cause, i.e. an act or failure to act which  resulted in Dan Markingson's death. These two doctors were  unethical, careless and medically negligent.  Why has there been no homicide investigation for what is clearly criminally negligent manslaughter? Plainly, these psychiatrists were aware of the risks, yet they failed to perform essential duties they owed to Dan.  When a patient dies because an unethical doctor is willfully negligent and fails to provide adequate medical care to a vulnerable adult whom the doctor owes both an ethical and legal duty of care to; it is homicide. In my opinion, Dan Markingson is the victim of iatrogenic homicide.

via Change.org:
Petition by Mike Howard


In November 2003, psychiatrists at the University of Minnesota used the threat of involuntary commitment to force a mentally ill young man named Dan Markingson into a very profitable, industry-funded study of antipsychotic drugs. Dan was enrolled in the study over the objections of his mother, Mary Weiss. For months Mary tried desperately to get him out of the study, warning the psychiatrists that Dan’s condition was deteriorating and that he was in danger of killing himself. The psychiatrists refused to listen to her. On May 8, 2004, Dan committed suicide, and Mary lost her only child.

I feel privileged and humbled to have called Dan my friend. Because of a very unique situation I had a front row seat watching Dan’s resilience as he attempted to overcome not only his original mental and emotional crisis, but also the trauma that occurred when he was betrayed by those who were charged and licensed to provide care, healing and protection. For the past nine years Mary and I have tried unsuccessfully to have the University of Minnesota and its psychiatrists held accountable for Dan’s death. But Mary’s lawsuit against the university was dismissed on a technicality in 2009, and the university used legal threats to force her to give up her right of appeal.

Even so, Mary has refused to back down. In 2009, the Minnesota state legislature passed “Dan’s Law,” which prohibits researchers from recruiting a patient under an involuntary commitment order into a psychiatric drug study. Media outlets such as Mother Jones, the St. Paul Pioneer Press, City Pages and Scientific American have published accounts of Dan’s story. His story was also featured in the documentary film, Off Label. In 2010, AstraZeneca, the sponsor of the study in which Dan died, settled federal fraud charges for $520 million, and a University of Minnesota psychiatrist was implicated. Last year, the Minnesota Board of Social Work found serious wrongdoing by the study coordinator for the research study in which Dan died.

More recently, evidence of fraud and serious privacy violations in psychiatric studies at the university have emerged. It is possible that other research subjects have died or suffered serious injuries, or that they have been mistreated in other ways. Bioethicists at the University of Minnesota itself have called for an external investigation, yet the university still refuses.

I cannot tell anyone else what way of speaking out is most aligned with his or her own personal principles. However, I believe those of us who are personally affected by these issues must break the silence about the human rights violations inherent in coerced participation in psychiatric research. While University of Minnesota researchers used many unethical methods to force Dan to participate in this research study, the most egregious of them was fear. Dan was afraid that there was no alternative to taking part in the study, and that he would face a complete loss of liberty if he did not participate.

Given the repeated failure of university officials to act in good faith, I believe that the Governor of Minnesota, Mark Dayton, should appoint an external panel of experts to investigate ethical wrongdoing in psychiatric research at the University of Minnesota, including the circumstances surrounding Dan’s death. The panel should be given latitude to investigate the University of Minnesota human subject protection program, the Department of Psychiatry, the Office of the General Counsel, and any other university officials involved in the oversight of human research.

Let me finish by allowing Mary Weiss, Dan’s mother, to speak for herself.

Dan and I were very close. I have experienced more anguish than I thought humanly possible since Dan’s death. He had dreams, like everyone. He had a talent for creative writing, and he had hoped one day to write for The New Yorker magazine. Unfortunately, his unfinished life robbed him of this dream. In fact, his short time on earth took many dreams from him, and also from me. The things he wished for, I wanted him to realize. Please demand an investigation into the circumstances surrounding Dan’s death, and help ensure no other family ever suffers such a loss from unregulated and improperly supervised clinical trials. Please sign the petition below. Help us find justice, not vengeance.

Text of the Letter to

I just signed a petition asking you to investigate possible research misconduct in the Department of Psychiatry at the University of Minnesota.

I am disturbed by the refusal of university officials to investigate the suicide of Dan Markingson in an industry-sponsored research study in 2004. I am also concerned by the university’s refusal to look into the possibility of misconduct in other psychiatric research studies. As a public institution, the University of Minnesota has a responsibility to answer legitimate questions about its research activities and to protect the rights and welfare of research subjects.

I urge you to appoint an impartial, external panel of experts in research ethics and regulation to investigate.

Thank you for your consideration.
Sincerely,
[Your name]