Emergence of a rapid ‘supersensitivity psychosis’ following sudden withdrawal of clozapine has been well documented in the literature (2) ; various studies have attributed rapid relapse following clozapine withdrawal to clozapine induced supersentivity for dopamine, acetylcholine or serotonin receptors (3). Seppala et al (4) found a rapid deterioration in mental state following withdrawal in almost half the patients of a group who had been on long term clozapine treatment and, according to Seeman and Tallerico (3) , the rate of psychotic relapse in patients withdrawn from clozapine is five times higher than that for a traditional antipsychotic such as haloperidol or flupenthixol. Clozapine withdrawal psychosis has also been observed to be severe in symptomatology and in some cases associated with delirium (5).linicians to see patients suffer a severe rebound psychosis as a result of sudden clozapine withdrawal. Emphasis has rightly been placed on preventing a sudden discontinuation of other psychiatric medications with the potential of precipitating a rebound illness (e.g. lithium ) by educating patients. Unfortunately, in our experience, this does not necessarily extend to clozapine.


In our opinion, patients should be made aware of the risks of sudden discontinuation of clozapine treatment, including the possibility of severe symptomatology, at the treatment planning stage with a clear care plan to manage a rebound illness in the event of a sudden discontinuation. From a medicolegal perspective, given that rebound psychosis cannot be considered rare, a clear explanation of the phenomenon during the consent to treatment interview should form a crucial part of obtaining informed consent before prescribing clozapine. (emphasis mine) here

Clozapine is not one of the more commonly prescribed neuroleptic, or "antipsychotic" drugs, but it was the number three cause of drug-induced death from FDA approved drugs from 1998 to 2005.

a couple of excerpts:
"Conclusions  These data show a marked increase in reported deaths and serious injuries associated with drug therapy over the study period. The results highlight the importance of this public health problem and illustrate the need for improved systems to manage the risks of prescription drugs." 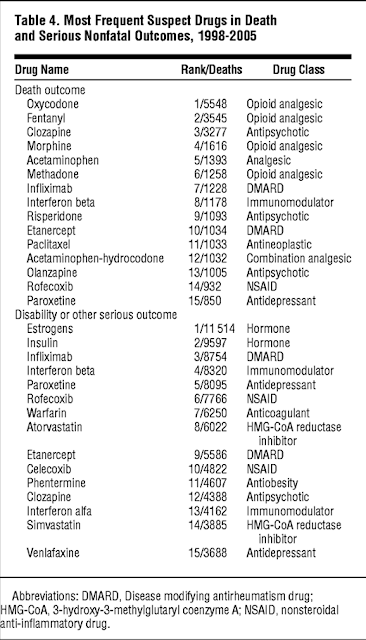 "On admission, all medication dosages were tapered during a 1- to 4-week period. This was followed by a medication-free period of up to 3 weeks (mean, 2.7 weeks; SD, 1.2 weeks), as tolerated by the patient. " here
via Medscape:

Thank you very much indeed for posting "Rebound psychosis following withdrawal from clozapine". I also came across this very important article when it came out 2 years ago.
I experienced a severe clozapine discontinuation syndrome even though I reduced the clozapine very, very slowly over one year. I did not actually have psychosis when I was forced to take clozapine against my will. It is just that I was unfortunate enough to be admitted to the National Psychosis Unit where they try to put everyone on clozapine. (See my blog)
When I came off clozapine I experienced a severe psychosis, none of the psychotic symptoms I had experienced before.

I am so thankful I found this article my son has now in the hospital for over a month and he has rebound psychosis due to his psychiatrist decreasing his clozaril from 200 mg to 25 mg, this was done over a month period and I assume that is why he had a gradual breakdown. My son does not even know who I am and although they have put him back on the clozaril at a higher dosage he still is doing badly. I am searching for any information as to how long it will take for him to get back to where he was?

I am very thankful I found this site - I have been searching to understand what has happened to my son and now I know. My son was on clozaril 200mg and it appeared as though he had grown tolerant and was not doing well. The doctor never mentioned his dosage could be increased and began to decrease his meds to 25mg. He had a complete break with reality and has been hospitalized for over thirty days - lost 40 lbs and still is in a very bad place, he does not even recognize his family. I wish the doctor had known what she was doing because I am terrified how long will it take to get him back to where he was.

I am very thankful I found this article - I now understand what my son is enduring because his doctor decreased his clozaril. It has been over 30 days inpt & although they put him back on clozril at a higher dosage he still has not recovered. It is disheartening to know that so many doctors do not know how to treat their patients and because of neglect people suffer.

Teresa,
I'm sorry to hear of your son's difficulties. It is more than unfortunate that people are not given more complete information about the risks of taking and tapering the dosages of neuroleptic drugs.
Becky