A consensus of educated opinions is evidence only of agreement...it is not empirical evidence of diagnostic validity, a specific drug's effectiveness or safety for a specific condition or age group.  Treatment standards used in standard clinical psychiatric practice recommend drugs with serious  disabling and even fatal risks; yet the renown "Expert Consensus Guidelines" that recommend using the drugs, are based on the answers given by 41 psychiatrists on a survey developed with the intent that the survey answers would become the pseudo-evidence base for "Expert Consensus Guidelines," a critical component of an unethical plan to sell the idea that undesirable emotions and behaviors are "symptoms" of psychiatric disease. Symptoms are used to give a person a subjective psychiatric diagnosis;  often told they have a "disease," or "disorder" that  can then be altered with psycho-pharmaceuticals...er, I mean "safely and effectively treated."

The fact is, except for the myriad of iatrogenic, or "physician caused," diseases. Iatrogenic diseases which are caused by the direct, adverse teratogenic effects of the prescribed drug/s mechanism/s of action. Neuroleptic, and other psychotropic drugs used by psychiatrists, can induce neurological, cognitive, and visual impairments, and cause metabolic, hormonal, cardio-vascular, and thermo-regulatory dysfunction; these adverse effects can become permanent disabilities. Iatrogenic duseases are often medically neglected by the "doctors" who cause them. Iatrogenic homicide is not uncommon; people are "successfully treated" when/if they are treatment compliant; even if the "treatment" is disabling and/or fatal...The "experts" don't count the number disabled and killed by psychotropic, or any other FDA approved drug; which effectively prevents an evidence based risk benefit analysis impossible.

Expert Consensus Guidelines
41 out of 46 expert psychiatrists agree:
a consensus of "professional opinions" is empirical evidence! 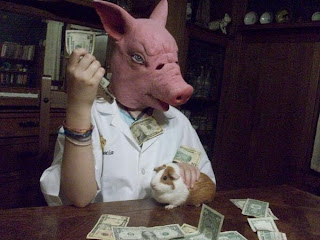 picture via FearLoathingBTX
It is plain that psychiatric standards of care based on the subjective opinions of "experts" on a survey are not valid "evidence;" much less, an ethical, scientific foundation for psychiatric treatment guidelines. Expert Consensus Guidelines are a drug marketing tool that harms patients and discredits medicine and psychiatry.

Originally, standards of care served to protect patients from unethical doctors using dangerous, ineffective, and/or unproven, treatments. In psychiatry, it appears the definition of treatment has been altered, and the purpose of treatment algorithms used in standard clinical practice serve primarily to protect the professionals from valid legal claims for iatrogenic harm. For example, "Expert Consensus Guidelines," the brain child of Dr. Allen Frances, Chairman of the Dept. of Psychiatry, Duke University; Dr. John P. Docherty, Professor and Vice Chairman of Psychiatry, Cornell University; and David A Kahn, Associate Clinical Professor of Psychiatry, Columbia University, founders of Expert Knowledge Systems, the educational division of Comprehensive NeuroScience, Inc. redefined the term, 'guideline' in order to disguise the fact that this guideline was part of a drug marketing agenda, as such, it was not based on any empirical evidence. It was developed and marketed as an evidence-based guide to prescribe psychoactive drugs in standard clinical practice marketed to general practitioners, pediatricians, and other medical specialists and like the infamous Texas Medication Algorithm Project, or TMAP, Expert Consensus Guidelines was initially funded by Johnson and Johnson, makers of Risperdal, as part of a marketing strategy.

Seemingly overnight, neuroleptic, so-called, "antipsychotic" drugs, and other psychotropic drugs were being prescribed according to what may appear to be "legitimate" medical guidelines. Used by unwitting GPs, pediatricians, and other doctors to treat their patients emotional/behavioral difficulties believing the "expert" guidelines to be evidenced based, ethical standard of care; not a marketing strategy. Once critically analyzed, it's apparent that "Expert Consensus Guidelines" are not based on the treatment needs of psychiatric patients; or the safety and/or effectiveness of the drugs for the reasons prescribed. The guidelines are a commercial marketing scheme bought and paid for by a corrupt industry to sell the idea that emotional distress and undesirable behaviors are symptoms of neuro-cognitive biological diseases that are easily diagnosed, and effectively treated with Risperdal alone or in combination with other psychotropic drugs...

To improve the quality of medical care while reducing costs, it is necessary to standardize best practice habits at the most crucial clinical decision points. Because many pertinent questions encountered in everyday practice are not well answered by the available research, expert consensus is a valuable bridge between clinical research and clinical practice. Previous methods of developing expert consensus have been limited by their relative lack of quantification, specificity, representativeness, and implementation. This article describes a new method of developing, documenting, and disseminating expert consensus guidelines that meets these concerns. This method has already been applied to four disorders in psychiatry and could be equally useful for other medical conditions. Leading clinical researchers studying a given disorder complete a survey soliciting their opinions on its most important disease management questions that are not covered well by definitive research. The survey response rates among the experts for the four different psychiatric disorders have each exceeded 85%. The views of the clinical researchers are validated by surveying separately a large group of practicing clinicians to ensure that the guideline recommendations are widely generalizable. All of the suggestions made in the guideline are derived from, and referenced to, the experts' survey responses using criteria that were established a priori for defining first-, second-, and third-line choices. Analysis of survey results suggests that this method of quantifying expert responses achieves a high level of reliability and reproducibility. This survey method is probably the best available means for standardizing practice for decisions points not well covered by research. (emphasis mine)

via Alliance for Human Research Protection:

"Not only were Frances, Docherty, and Kahn ready to violate standards of conflicts of interest in mixing guideline preparation with marketing for J&J, but also in publicizing the guidelines in coordination with J&J. The three men established Expert Knowledge Systems [EKS]. The purpose of this organization was to use J&J money to market the guidelines and bring financial benefits to Frances, Docherty, and Kahn."here

via The American Journal of Managed Care: