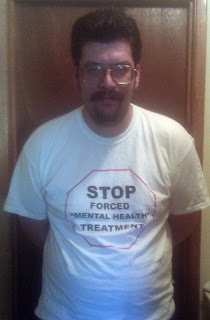 Medical standards of care originally were based on clinical research and clinical experience; ethical medical standards originally were diagnostic procedures and treatments for symptoms and medical illnesses with known risks and potential benefits discussed for informed consent for prescribed treatment. Standards of care protected patients from unsafe medical practices and unethical professionals. The standards being promulgated for use in standard psychiatric clinical practice and recommended for use in pediatric and general medical clinics currently are written to conform to what is, and has been standard practice in real world mental health clinical practice for decades.

In real world clinical practice, it not unusual for irresponsible off label prescribing of dangerous psychotropic drugs with little, if any empirical support; i.e. drugs are prescribed for no valid, ethical medical purpose. Incredibly, drugs are prescribed without empirical evidence of either the drug's safety or effectiveness for the patient, and/or the condition and/or syptom the drug is prescribed to treat, drugs are sometimes the only "treatment" available. Psychiatry's current standards of care protect psychiatrists and the other medical practitioners who are trained to practice "psychopharmacology," not evidence based medicine, social and political control of individuals based on consensus of professional opinions.  Psychiatric "standard treatment" endangers patients. Obviously, psychotropic drugs which have teratogenic effects and have inherent risks which include cognitive, neurological and physical disabilities and early/sudden death. Once drug impaired, psychiatric patients are limited in their capacity to complain of mistreatment and effectively advocate for themselves. Many will develop drug-induced cognitive, neurological, metabolic, and cardio-vascular impairments which are medically neglected by the doctors who inflict them.

Apparently, it's an article of faith for psychopharmacologically inclined psychiatrists to believe the subjective observations and opinions of psychiatrists can miraculously transubsantially transform agreed upon opinions and beliefs into "scientific evidence" through a quasi-democratic process of consensus. Imagine that! A consensus of the opinions of psychiatrists validates psychiatric diagnostic criteria. Psychiatrists agree teratogenic drugs are therapeutic and "necessary" by legal force if required. Seemingly, by ignoring the direct adverse effects of teratogens on their patients,  psychiatrists become willfully blinded to disabilities and infirmaties, the iatrogenic medical injuries that consensus based psychiatry inflicts upon humanity with seeming impunity.

In every other field of scientific inquiry, subjective observation and opinion is suitable only to support findings and conclusions derived from empirical data collected in research and real world practice. Educated subjective opinions and observations are no substitute for medical knowledge gained from ethical scientific research, and thoughtful consideration of all available data. Using medical terms,  relying on consensus without offering valid empirical evidence to support psychiatric standards of care is an egregious abuse of power, authority and medical  privilege---There is no substitute for empirical evidence, and no excuse for abdicating the use of sound medical judgement and ethical medical principles.

Psychiatry's consensus-based diagnostic manual, the DSM, and consensus-based treatment algorithms such as TMAP and , are not ethically, medically or scientifically valid. TMAP and T-MAY, are consensus-based treatment protocols developed to market drugs and/or unethically "validate" off label prescription of dangerous FDA approved drugs; i.e. off label prescribing becomes psychiatry's "standard of care"absent empirical support or contrary to available evidence of either  drug safety or effectiveness for patient or symptom or condition...

How did off label use of dangerous drugs become so common, more importantly, how can it be considered ethical or even a "standard medical practice?" Psychotropic drugs are teratogens; yet they are prescribed without evidence of effectiveness, even though they have inherent, disabling, even fatal risks.


Abuse of prescription privileges.
Psychiatry: a consensus-based standard of care.

Psychiatry's so-called standards of care are commonly used to "validate" the prolific off label prescribing of neuroleptic, or so-called "antipsychotic" and other psychotropic drugs to children, the elderly and traumatized veterans. Treatment algorithms are based on consensus and "validated" by a quasi-democratic process. In reality, what are obviously political decisions are the justification, not exactly the needed evidence base, for so called standards of care. These "standards" which primarily serve to protect practritioners who use them by providing a pre-emptive affirmative defense against medical malpractice for iatrogenic injuries. Standards of care shield psychiatrists against malpractice claims for drug-induced iatrogenic injuries, permanent disabilities weven  fatalities inflicted with impunity. Most victims are mostly poor and/or reliant on Federal Medical programs. Marginalized by poverty, stigmatized with a diagnostic label, patients can be systematically dis-empowered a direct effect of legislating bigotry. Grass roots advocates who proclaim themselves to be "The Nation's Voice on Mental Illness" do not acknowledge psychiatric survivors/victims, much less advocate justice for victims of iatrogenic harm, educate the public about drug-induced disease, disability and death. The Nation's Voice does not speak for those who are killed as a direct result of psychiatric treatment.

a mess, [still] deserving close attention…
a couple of excerpts:
"Childhood Psychosis is an uncommon finding, but can be associated with significant impairment, and the article mentioned by Dr. Purssey purports to be discussing childhood psychosis. But we all know that the extensive use of Atypical Antipsychotics in children [Medicaid children] isn’t about childhood psychosis at all. It’s off-label uses. The drugs are being prescribed for behavior control. That’s where the costs come from. That’s where the dangers are. That’s where the risk/benefit equation has been massively perverted. That’s the reason for the alarm. These are the kids that were inappropriately labeled Bipolar, justifying the use of these medications.

"There can be little question that the incidence of behavioral problems among the children on Medicaid is quite high. In fact, it would be surprising if that weren’t the case. Many of them are foster children or otherwise born into families in difficult circumstances. And for all its glitches, our foster-care system beats the orphanages of a former time hands down. These medications can be somewhat effective in situations when these children inevitably present with behavior problems, but at a very high price. Foremost, this is not a situation best approached by symptom control. Childhood is not something to be gotten through. It’s the period of complex development that shapes directions for a lifetime. This is a self-evident truth. It’s impossible to imagine that the important work of childhood can proceed through the fog of Antipsychotics – so the side effects such as the metabolic syndromes are an additional burden to children already swimming up-stream. Rampant medication in these situations is a clearly inappropriate and dangerous medical solution to a psycho-social problem. This is not simply something to decry. It needs to be stopped." read here

Here is the latest treatment algorithm to ensure kids will be drugged:

Psychotropic agents are increasingly prescribed to aggressive youth on an outpatient basis,5–7 despite limited efficacy and safety data.6 For example, sixfold increases in outpatient antipsychotic prescriptions were found between 1993 and 2002,8 followed by further increases between 2002 and 2006,9 largely with aggressive, nonpsychotic youth. These practices fall largely outside of indications approved by the Food and Drug Administration, raising concerns about efficacy, safety, role of alternative therapies, polypharmacy, and appropriate parent engagement and education.9Furthermore, a significant portion of antipsychotic prescribing takes place by primary care physicians, including pediatricians. For example, an estimated 32.2% of antipsychotic prescriptions for children ages 2 to 18 during 1995–2002 were by non–mental health providers.10 Evidence-based guidance is necessary for implementing care that addresses patients’ severity and source of symptoms, development, primary diagnosis, coexisting conditions, and family situations.11
To address these needs, the Rutgers Center for Education and Research on Mental Health Therapeutics, in collaboration with Columbia University, the REACH Institute, and others, launched a consensus development initiative to address the outpatient management of maladaptive, impulsive aggression in children and adolescents.
Treatment of Maladaptive Aggression in Youth: CERT Guidelines I. Engagement, Assessment, and Management