How Many Go Without Effective Assistance of Counsel?

I know what it is to be betrayed.  In the summer of 2010, my eldest son and I took my youngest son to the local mental health crisis center.  The Designated Mental Health Professional, 'DMHP,' Nancy Sherman, committed forgery and perjury in seeking an order to detain my son involuntarily; even though he was seeking to be hospitalized.  I feel an overwhelming sorrow for having taken him to a facility which maligned, further stigmatized and traumatized my son.  Central Washington Comprehensive Mental Health apparently has employees who have no problem ignoring the Rules of Evidence when petitioning for an Involuntary Commitment, and the CEO, Rick Weaver claims that original Court Documents are shredded all the time.


What I find incomprehensible, that 'Officers of the Court' have allowed crimes to be committed and have actively been complicit.  Officers of the Court who are prosecutors and defense attorneys, have in their official capacities, deprived individuals of their dignity, their Liberty and their individual rights, with impunity.   Since when are gossip and innuendo evidence; and considered sufficient grounds for a deprivation of a a person's liberty?  Locally, there is no recognition that client-centered and client directed care is mandated by Federal Medicaid Law.   All mental health services paid for by Medicaid are supposed to be client-directed, and in the case of children, family-driven and child-centered, in order to be reimbursed through the Federal Medicaid program.


Yakima County is actually being paid to come into compliance with this mandate; and transform the children's mental health service system.  The agency who receives the vast majority of federal and state mental health funding is the agency that runs the crisis center.  It is also the one that is to lead the transformation effort for the children's service system; although it is the only agency with NO experience providing children intensive mental health services in their own family environment.


Designated Mental Health Professionals are not supposed to lie or say people broke things when they did not.  Facts are to be reported accurately.  Apparently, Nancy Sherman, DMHP, thinks it is acceptable to lie to Yakima County Superior Court.  She committed perjury and forged an affidavit; these are felony crimes.


My son's attorney, Jennifer Lesmez, knew the testimony offered by this unethical DMHP was not based on first hand information; and failed to defend my son.  She failed to question the the veracity of the testimony used against her client.  The prosecutor proceeded by presenting perjured testimony; he ignored the Rules of Evidence entirely.  The Yakima County Deputy Prosecutor and Assigned Counsel Attorney are officers of the court who facilitated CWCMH employees in obtaining an illegal Court Order in Yakima County Suprior Court.  These proceedings in their entirety made a mockery of the Yakima County Superior Court.

Justice, and the appearance of Justice being done, were conspicuously absent.


The individuals most responsible are the designated MHP Nancy Sherman, who perjured herself and committed forgery; Dr. Jeffery Jennings also committed perjury by attesting to events that in fact did not occur.  He was only to attest to facts known first hand to be true.  Yakima County Assigned Counsel, Jennifer Lesmez failed to defend her client.  Nancy Sherman, whose statements were not investigated, e.g. verified; by Deputy District Attorney Dan Polage, who had a legal and ethical duty to do so.  I had spoken to Mr. Polage three times; so he knew the 'evidence' he was submitting to the Yakima County Superior  Court was perjured testimony.  This makes Mr. Polage a willing accomplice to felony crimes which deprived my son of his Liberty without preserving his Constitutional Rights to Procedural Due Process of Law.  These events caused my son to be further stigmatized, he was slandered in Yakima Superior Court.  He was also entered into a tracking system for life; permanently labeled as unwilling to seek help when he needs it...


Attending psychiatrist, Jeffrey Jennings insisted on talking to Isaac who wanted to be left alone.  Isaac asked him 4 times to please leave him alone, that he wanted to sleep.  This request to have his wishes honored, is a right when one is on a psychiatric ward, one that Jennings did not respect.  Even those who are on on inpatient psychiatric wards usually know that when you are in the hospital you should be listened to and respected.  Apparently, Jennings is not respectful, and he persisted insisting that Isaac talk to him.  Isaac yelled, "Get the f out of my room!"  This was recorded in the medical chart, Isaac became agitated and needed to be drugged---no cause of the sudden agitation being the psychiatrist's disrespect, of course.   This quack made it a part of Court Order and my son was drugged in the middle of the day on an ongoing basis. Jennings spoke to no one who knew Isaac the entire time he was his attending physician, even though he had the contact information for his current GP, mental health provider, his brother and myself; totally unethical.


My son's Constitutional Rights to Procedural Due Process were ignored.  This travesty started with Nancy Sherman's felonious behavior.  She committed 2 felonies each of which is punishable by up to ten years in prison.  There is also a civil penalty for any person whose actions cause a person to be confined unduly, since it is Unconstitutional to deprive a person of their liberty without Procedural Due Process of Law.  Apparently, Assigned Counsel, Jennifer Lesmez was not in class the day a defense attorney's duty to defend a client was discussed.  She did not seem to realize it was on the 28th of July when Nancy Sherman fraudulently obtained the emergent order to detain my son, without serving him proper notice until hours after she proceeded to have him legally detained.  She also did not inform me as she attested to doing in her sworn affidavit.  The affidavit Jennings filled out seeking to extend the Court Order very clearly instructs him to attest only to facts he knows "first-hand" to be true.  He knew no facts about what had occurred, he had no 'first hand' information.  He used Nancy Sherman's perjured testimony.


It took a total of one minute and twenty-six seconds for the entire hearing; which court ordered my son to a ninety day extension of the involuntary commitment order.   Based on perjury and forgery, not even legal.


The reality for Isaac and others like him here in Washington State and in every state in the Nation, is that individual Constitutional Rights are neither preserved, nor defended when court orders for inpatient or outpatient mental health treatment are obtained.  These Rights are violated as a matter of course.  In Yakima County, the people facing adjudication in this type of proceeding, are often not defended at all by Assigned Counsel.  I was told this by an attorney who worked for the Office of Assigned Counsel.


Former Yakima County Assigned Counsel, Jeff Burkhart, told my brother and I that in one year he was given 700 involuntary commitment cases to defend; of which, he mounted a defense (unsuccessfully) for 3 of his clients; failing to perform his ethical and legal duty in 697 out of 700 cases.  Mr. Burkhart is the only attorney who advertises as specializing in defending people facing civil commitment in Central Washington.  His website states, "Walla Walla attorney Jeff Burkhart has extensive experience litigating these proceedings — he has handled several hundred ITA matters."   I have no doubt that the $3,000-$5,000 retainer requested by Jeff Burkhart to defend my son would not have been a wise investment; given his bleak record.  While I appreciated his candor, I am more than a little troubled by his admission.  Why would an attorney even admit such a thing to a prospective client?  It is not something to be proud of, it is legal malpractice.

How can an attorney fail to MOUNT ANY DEFENSE WHATSOEVER IN 697 OUT OF 700 CASES? 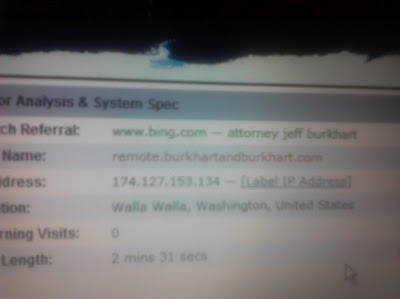