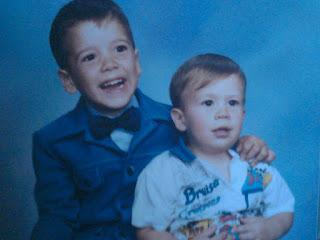 My two boys are now young men.  As you may be able to tell, Nathan was a fan of Pee Wee's Playhouse.  He was also an outspoken critic of Mr. Roger's, "I hate Mr. Roger's!"  Isaac was in perpetual motion and interested in how things worked and how things were put together.  Being totally intelligent, he knew the best way to figure out how things were put together is to take them apart.  Being under two, he did not know how to reverse the process!

We went out to an all you can eat Chinese buffet last week and afterwards in the car, We were all singing along to Bill Wither's, "Ain't No Sunshine."  It was the first time I'd heard Isaac sing in months.   Real sunshine; I'm still basking in the warmth.