"I love you too mom"

Isaac has been totally present for a few days.  Sometimes, I wonder if he is psychic. I say this because I have noticed that when we are both occupied, "doing our own thing" and not talking; when I think of him, he will invariably suddenly say, "I love you too mom."


Today was blood draw day.  When Isaac got up, he took his shower and got dressed.  I told him that I would take him, but he wanted to go on his own.  I went to meet some friends who live close by, just a few blocks away.  Isaac occasionally walks to their house to visit.  Today one of them was excited, in fact she said she felt proud, and had to "brag about Isaac."  She said the last time Isaac came to visit, he walked in and went to the kitchen, then turned around and went back into the living room.   He went back so that he could tell my friend's mom, "It's nice to see you again," and shake her hand.   Later, when my friend's mom came to the kitchen, Isaac asked her for a hug.   My friend's mom is not a "hugger;" my friend told me her mom was honored that Isaac wanted one from her.

This is huge.  He felt safe, with someone he does not know well---When he is feels safe, he can be present.  It is when he feels threatened, judged or criticized that he retreats; to protect himself.  Acceptance, respect and positive regard allow him to feel safe---He needs help; but how he is helped; e.g. how people talk to him, tone of voice, facial expression, and the words used; all matter.  Equally important, being respected when he talks.  If what he says is respected and validated; he feels safe.  People with a psychiatric diagnosis really are like everybody else you know.

Food is an issue, and has been since Isaac was first put on psychiatric drugs.  What he preferred to eat immediately changed, and not in a good or healthy way.  Prior to being drugged, a snack was an apple, a carrot or some other fruit.  After being prescribed drugs, it was high fat and sweets that he wanted.  He wouldn't eat what I cooked a lot of the time, food that he once liked, he would no longer eat.  I don't tell him, because he needs and deserves the freedom to make his own choices.  An example of this is tomatoes.  For months, I would ask, "do you want tomatoes" on your salad, burger, etc.; one day he said yes.  He would not eat them in salad, or on a burger, or in soup, or chunks in pasta sauce; but now he eats them in all these dishes.

The first year he was home, I worked really hard "role modeling" how to "eat healthy."  It worked.  I lost forty pounds; he gained 80.  Ok, so it worked out better for me than it did for him that first year.  But he has since made a lot of progress.  After that 80 pound gain, he was wearing a size 46, and they were snug.  He is now wearing a 38.  The progress is due to Isaac wanting to be healthier, and being willing to listen to those around him---most of the time.  There are relapses---and those of us who have struggled with emotional eating or changing unhealthy habits know that progress is seldom linear.

Isaac takes walks; the other day he went for a jog at the track down the block.  He came home huffing, puffing, and pouring sweat; and asked me, "can you get me a drink of water?"  He knew he needed to drink water!  Just a short time ago, I had to remind him to drink water.

The other thing he has been doing is playing games on the computer, and the more he has done this, the more present he has become.  His sense of humor is for me personally, the best part of how he has been lately.  I made a comment the other day that I needed to get off my behind and get some work done.  He says, "Mom, are you saying you got junk in your trunk?"  I said "you're so funny."  He responded, "I'm freaking hilarious." It may not be stand-up material, but to me, it is.

Tonight he had to have three bowls of this for dinner.  It had green peppers and several small yellow and red sweet peppers, and he never used to eat any peppers EVER: 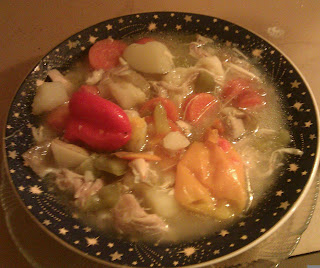 This is huge progress and I am so happy to hear this. My son, Chris, gained a lot of weight, partly due to boredom, and lack of self-awareness, not entirely because of the drugs. It has taken several years, but, like Isaac, Chris is starting to exercise. The acceptance you are referring to in today's post, is called "low expressed emotion." It is so important in allowing a person to blossom. So important!

As for the "low expressed emotion" it doesn't come naturally, at all. It's alright to have to work at it...Meditation sure helps a whole helluva lot! So does being able to sleep--

I notice that a lot of people(myself included) seem to eat when unaware or not attending to other needs, like sleep, exercise, etc.