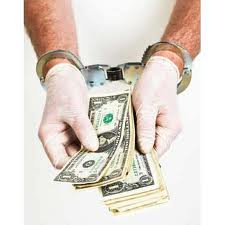 via Bernie Sanders US Senator for Vermont:

Sanders: Crack Down on Pharmaceutical Fraud May 23, 2012

Sanders' amendment to a Food and Drug Administration bill before the Senate would take away exclusive marketing rights - potentially worth hundreds of millions of dollars - if a company is found to be at fault for fraud involving a particular drug.

"Companies that are fined for overcharging Medicare or Medicaid, or for dangerous illegal marketing practices, should not enjoy government-granted monopolies on those same medications," Sanders said.

The pharmaceutical industry achieved a dubious distinction in 2010 when the dollar amount of fraud against the government surpassed the notoriously-corrupt defense contracting industry, according to a Public Citizen study. Drug makers accounted for nearly half - $1.8 billion out of $4.1 billion -- of the penalties collected in 2011 by the Health Care Fraud and Abuse Control Program, a joint task force of the Department of Justice and the Department Health and Human Services. This year, pharmaceutical companies are expected to pay up to $9 billion under pending fraud settlements, according to Taxpayers Against Fraud.

While the penalties are steep, the amount pales in comparison to the huge revenues generated by illegal and fraudulent practices such as off-label marketing and price inflation. The top-12 pharmaceutical companies made $49.1 billion in profits in 2011, with Pfizer making $10 billion and Johnson and Johnson making $9.7 billion. "The penalties these companies pay when they are caught and prosecuted simply aren't big enough to stop them from being repeat offenders," Sanders said.

The too-many-to-list examples include:
Abbott Labs, which agreed last month to pay $1.6 billion for illegally marketing the anti-seizure drug Depakote. The New York Times said the company also agreed to plead guilty to one misdemeanor charge for violating the Food, Drug and Cosmetic Act for misbranding.
Abbott Labs agreed to pay $421 million in 2010, along with two smaller companies, to settle charges that they deliberately spiked drug costs by up to 10 times the actual cost in order to boost reimbursements from Medicare and Medicaid.
Pfizer, which paid $49 million to settle charges that a subsidiary defrauded the Medicaid program by overcharging for the cholesterol-lowering drug Lipitor.
A division of Pfizer pleaded guilty to two felonies and agreed to pay $430 million to settle charges that it fraudulently promoted the drug Neurontin for a string of unapproved uses.
GlaxoSmithKline, which in 2011 reached an "agreement in principle" to pay $3 billion to conclude the company's most significant ongoing federal government investigations into illegal sales and marketing practices for a diabetes drug that was severely restricted last year after it was linked to heart risks.
Merck, which in 2009 reached a $670 million settlement for fraud on patients and Medicare/Medicaid involving a conspiracy with hospitals to give the elderly cheaper drugs but charging them for the more expensive product prescribed by the patients' doctors.
Merck last year pleaded guilty to a criminal misdemeanor charge and paid a $950 million settlement for illegally promoting Vioxx for rheumatoid arthritis before that use was approved. Vioxx was linked to thousands of heart attacks and sudden cardiac deaths before it was pulled from the market in 2004.
Johnson & Johnson last year illegally marketed Risperdal, an anti-psychotic medication, to nursing home patients, and paid over $2 billion in fines, a mere 6.3 percent of sales from the drug.

"And on and on it goes," Sanders said. "The bottom line is that the pharmaceutical industry is making money hand over fist while it systematically defrauds taxpayers, all the while individuals in the United States (let alone the developed world) are not getting the medicines they need because they cannot afford them."

Sanders' amendment would send a message to the drug industry that illegal behavior will not be rewarded with government-granted monopolies.