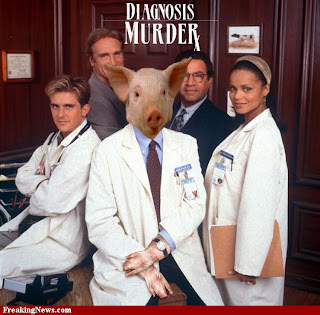 Because of the attention being brought to the issue of using psychiatric drugs on children, there have been some efforts to get a handle on the over-prescribing of these dangerous neurotoxins to foster children in the State of Washington.  It would be more accurate to say  there is quite a production being made about 'taking action;' it gives the impression that the SOW is actively 'doing something,' and I am sure they are. It just doesn't seem what they are doing is making changes that focus on doing right by the children who are wards of the State of Washington.  A study conducted that was paid for by the people of the State of Washington; all of the authors are State employees and/or teach at the University of Washington, but the report is only available in a psychiatric professional journal.  Why would a study paid for by the  people of Washington State be available in a journal that the general public does not have ready access to?  It's safe to assume that most folks in Washington State do not subscribe to the Journal of the American Academy of Child and Adolescent Psychiatry; Washington's citizens paid for the study, why should we have to pay $12.00 to read the report?

via the Journal of the American Academy of Child and Adolescent Psychiatry:

Disclosure: Dr. Varley is on the speakers' bureau of Novartis. The other authors report no conflicts of interest.

Abstract
Objective
The appropriate use of psychotropic medications in youths is an important public health concern. In this article, we describe a review process developed to monitor the use of stimulants and atomoxetine for attention-deficit/hyperactivity syndrome (ADHD) in youths receiving fee-for-service Medicaid services.
Method
Washington State Medicaid developed threshold safety parameters for ADHD medications through a process involving the community. A second opinion was mandated when safety thresholds based on dose, combination therapies, or age was exceeded. Use and cost were compared 2 years before and after the program began.
Results

From May 2006 to April 2008, 5.35% of ADHD prescriptions exceeded safety thresholds, resulting in 1,046 second-opinion reviews. Of those, 538 (51.4%) resulted in a prescription adjustment. Adjustments were made to primary care physician (52%), psychiatrist (50%), nurse practitioner (54%), and physician assistant–written (51%) prescriptions. When the preperiod and postperiod were compared, second opinions reduced ADHD medication at high doses (53%), in combinations (44%), and for patients 5 years of age and younger (23%). The review process resulted in a savings of $1.2 million, with 538 fewer patients exceeding safety thresholds. This was a 10:1 return over administrative costs; however, the overall Medicaid expenditures for ADHD medication still increased because of higher unit costs and the preferential use by clinicians of newer brands entering the market.
Conclusions

A statewide second-opinion process reduced outlier ADHD medication prescription practices and was cost-effective. Suggestions for process and quality improvements in prescribing to children diagnosed with ADHD are discussed. J. Am. Acad. Child Adolesc. Psychiatry, 2009;48(7):740–748
"All activities outlined in this article were funded with state and federal funds through the Washington State Medicaid program. The views in this article do not constitute official policies of the state of Washington or the federal government. The authors thank the dedicated staff of Washington's Department of Social and Health Services for their tireless work in assisting Medicaid clients and balancing clinical and administrative complexities."
(emphasis mine)  here

Why select the class of drugs used for  ADHD diagnosis and not the drugs which are prescribed off label to 'treat' the behavioral and emotional difficulties a child has?  These difficulties are often simply a child's desperate attempt to have their needs met, not diseases that require teratogenic drugs.  Pharmaceutical drugs do not address a child's need for security, appropriate supervision and unconditional love.  The environmental conditions include the deficits a child's caretaker's have; whether the deficits are due to lack of education and financial resources, or neglect and abuse .  The symptoms  of emotional and  behavioral issues are perceived by many to require a psychiatric diagnosis and psychiatric treatment.  To be clear, I am speaking about the majority of children who end up in State care who are thought to need psychiatric drugs, when the child or adolescent does not have any identifiable physiological or neurological condition.  This definition excludes most of the diagnoses applied to children, who have emotional and behavioral problems because of abuse and deprivation; the obvious solution is simply to meet their needs consistently, and then see if they need help to process the effects of being abused and neglected.  They do not need to be told they have something wrong with their brains because the adults in their lives have not provided for their needs appropriately. Their symptoms are not likely to be caused by a mysterious and still not identified underlying disease, and telling kids this myth, is dishonest.

The decision to study the one class of drugs that is rarely used 'off-label' is suspect. The class of drugs with the most research supporting their use, are not the drugs which pose the greatest risk to children's safety. The drugs are also not responsible for the massive amounts of Medicaid fraud which continues unabated.  The Medicaid fraud should at least be a secondary priority.  The project reported in this article is part of an effort to mitigate the harm being done to children and teenagers in the foster care system by psychiatric drugs.  Why purposely target a class of drugs that are FDA-approved for pediatric use?

It is important to address prescribing of pharmaceutical grade speed to young children.  However, the larger risk is the neuroleptic drugs, called Second Generation Antipsychotics, or SGAs, being prescribed 'off-label' prolifically; the cost of which is fraudulently billed to the Federal Medicaid program.  In order for a prescription drug's cost to be reimbursed through the Federal Medicaid program, a drug must be FDA-approved for the reason it is prescribed; or listed as having scientific support for the purpose it is being prescribed in one of the recognized Prescription Drug compendia used by HHS and Medicaid.

Purposely targeting FDA-approved prescriptions instead of the 'off-label' prescription of drugs without FDA-approval and unsupported in the compendia is simply irresponsible and suspect.  How does this focus on pharmaceutical speed serve the best interests of the children who Wards of the State of Washington? How will it serve to protect them from the neuroleptic drugs or the SSRI antidepressants which are commonly prescribed off-label and have the potential to cause chronic, disabling and even fatal iatrogenic diseases?

The Morbidity and Mortality in People with Serious Mental Illness report details some pretty sobering statistics for the adults who take neuropeptics and other psychotropic drugs. In spite of the disabling and fatal adverse effects of psychotropic drugs, they are used off label indiscriminately even though the risks are declared to be much more profound for children and adolescents. There is no effort to stop the prolific off label use of teratogenic drugs on vulnerable children; no plan to stop disabling and killing children. No plan to stop defrauding the American taxpayer. This may be because we are expecting those we entrusted (the same professional group that initially recommended the drugs off label for pediatric use) to slow down the obscene proliferation of off label prescribing---

It goes without saying, but I'll say it anyway, these professionals are defending Human Experimentation on children which is now a Standard Clinical Practice, but is not ethical or "necessary medical treatment." It's a human rights crime.

It appears that they are not serving children's best interests;
they are serving the interests of  Pig Pharma...