The AG sent me a message

or at least his Executive Assistant did... 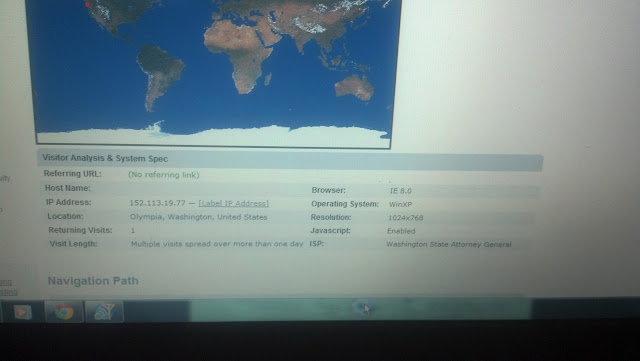 Let's just say I am disappointed that I finally receive a response on a FRIDAY, after business hours from a person who informs me she will be on vacation for the next few weeks, but will look for an email from me when she returns...

I sent an email to Mr. McKenna on September 15, of 2011,  I then posted a copy of it to my website after it had been received by the AG's office. I posted it to my website because by that time I knew that there is some very serious corruption and lawlessness that is systemic in DSHS DBHR. Specifically, I had come to realize that there is no interest in preserving or defending the Constitutional Rights of people civilly committed in Washington State---or even pretending that those who are Court Ordered even have any rights, or that the State has any duty to ensure that the Rules of Evidence and  Standard Court Procedures are adhered to; Proper Notice given and Proof of Service filed; and Effective Assistance of Counsel provided. As a matter of fact, when I first filed a complaint on my son's behalf. I was told the State HAD NO DUTY.

I voted for Mr. McKenna as I voted for Curtis King the Senator for this district, as well as Representatives Charles Ross and Norm Johnson. I received no response from your office. I received no response worthy of merit from my elected representatives. I also contacted every member of the Judiciary committee in the State Legislature NO response whatsoever. Perjury and fraud, specifically a forged Affidavit were used on July 28, 2010 to detain my son, by the DMHP, Nancy Sherman who lied to the court, lied to my elder son and myself and set in motion a chain of events that so traumatized my son, Isaac, that once I brought him home it was three weeks before I could convince him he was safe, and that he could go outside into our own fenced yard.  Nancy Sherman's employer shredded all of the Original Superior Court Documents, and the CEO Rick Weaver informed me there is nothing wrong with doing so, actually stating "We do it all the time."

Frankly, I find the content of your message to be less than honest; since I am well aware that someone in the AG's office has visited my website and has read enough to know exactly what my criminal complaint entails.  I am also aware that representatives from the AG's office were consulted from the beginning. I am sadly disappointed to say the least.  Felony crimes were committed which have diminished the integrity of the Washington State Superior Court, and there has been NO CRIMINAL INVESTIGATION launched in spite of a well documented complaint being filed promptly.

My son has had so many felony crimes committed against him in this state by employees and contracted service providers that I have lost count.  The first of which was when he was three years old and was the victim of violent assault in a foster home that had 12 complaints filed against the foster mother alleging abuse of children prior to his placement.  This assault was followed by my little boy being put in a closet and it was covered up with further crimes including the Superior Court being told by DSHS that my son was home and doing fine; when he was in fact  in the hospital for what turned out to be 10 months...All I have ever asked for when filing complaints in the last 18+ years is for the right thing to be done at any given time. Not once, has anyone ever been held accountable for victimizing my son, violating the law, or the administrative code of the State of Washington, and failing to do their duty as a public servant; who owed an ethical and legal duty to my son.   The foster parent was Margaret Manson; the woman who killed four babies in this State, so I am grateful my son is alive.

All due respect, as I stated previously, I find this email to be disingenuous for the reasons cited above.  That said, I would like to hear how the latest felony crimes committed against my son can be prosecuted to the fullest extent of the law.  If that is the intent of the Attorney General, I would be more than happy to assist in any way I can.  I have my son's Legal and Medical Powers of Attorney, as he is handicapped due to being used in the Drug Trials at CSTC without permission, by Jon McClellan and in spite of my vehement protests.


I have not included the entire text of Ms. Gaul's email; only the relevant part of her message:

Hello, I am Attorney General McKenna’s assistant. He is currently away from the office, so I am helping him monitor his email. You have sent a couple emails to him recently, and it would be helpful if you could provide us with some of the pertinent facts related to your son’s situation, and what you are asking the Attorney General’s Office to do....

...I will be out of the office for two weeks, returning on October 8th. I will check my email when I return to see if I’ve received a message from you.

Keeping up appearances in Washington State