Thank You For The Ominous Long-Term Health Risks 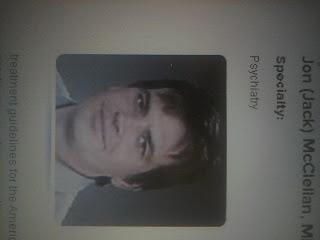 
"Whenever a doctor cannot do good, he must be kept from doing harm."  Hippocrates

Jon McClellan, the lead researcher for childhood schizophrenia in Washington State, is a doctor who should be stopped.  He is the psychiatrist who gave my son neuroleptic and other  psychotropic drugs without consent. He repeatedly told me I had no say in treatment decisions; no say about what drugs he gave my son.  He drugged my son without consent, much less, Informed Consent; while trialing neuroleptic drugs for FDA approval; so the drugs he used were not approved for use on children.  Drugged my son over my objections, into a state of profound disability. He told me I had no say in what drugs were given to my boy, who had an IQ of 146.  It is frightening that this man is still the Medical Director of the State-run psychiatric facility for children.

Schizophrenia is a diagnosis of exclusion.  What that means is that any and all other explanations for the symptoms must be excluded.  Until this researcher got a hold of him, my son was diagnosed with Temporal Lobe Epilepsy and PTSD, the latter due to having been severely traumatized, in foster care.  Both of these can cause the symptoms which Dr. McClellan concluded were symptoms of schizophrenia.  When I asked him if he was going to do an EEG to rule out the Temporal Lobe Epilepsy; he said it was not necessary.  My protests were labeled denial, my input was dismissed; I was told I had no say.

Ultimately, McClellan put my son on Clozapine which between 1998 and 2005 was linked to 3,277 deaths in the U.S. and over 4,300 events that resulted in disability or required medical intervention, according to the data in the FDA Medwatch adverse events reporting system.  Dr. McClellan lied to me and said that since the drugs was  put back on market in the US, with mandatory blood draws, no one had died from it's use. He also told me that it was only over in Europe that anyone died at all.  This conversation happened only after he had put my son on the drug, as did all the conversations about what drugs he was using to treat my son. Like all of the drugs used by Jon McClellan, on my son, it was not approved for pediatric use for the reason McClellan prescribed them.

The reality is, no matter the diagnosis or the symptoms; this doctor had no right to use my son as a guinea pig---and he had no legal authority to drug him without my consent.  He did not have my son's consent---or his mother's permission; he did not comply with the Hippocratic oath, the ethics guidelines of the medical profession, the laws of the State of Washington, Federal Medicaid guidelines, the U.S. Constitution, or the Nuremberg Code.  There is no way in hell I would have given consent, had I been given the opportunity and actually been informed, which he did not think was necessary. Quack Master Jack, Jon McClellan, a "lead researcher" funded by NIMH, played God.

What is known and has been know about this class of drugs for decades, is that they cause iatrogenic, i.e. physician caused; diseases, neurological impairments, disability, and sudden, and early death.  These are know risks, and as such, should be information discussed prior to administration.  I found these facts out on my own, not in any conversation I had with "Dr. Jack," as he told the kids to call him.  My son, who still takes Clozapine, is unaware of these risks; no psychiatrist has discussed them with him.  McClellan used many anti-psychotics, on my son without adhering to any ethical, moral, or legal standard; knowing this, I am disgusted that this man never loses an opportunity to decry their over-use.  He had no problem using them to drug my son; without warning either my son or myself about the "Ominous Long-Term Health Risks."


It didn't matter to Quack Master Jack that he didn't have
Informed Consent from the patient or his MadMother.
I was never asked if I wanted to sacrifice my son on the altar of corporate greed and have my son used in Drug Trials. Had I been asked, there's no way in hell I would have given consent. The TEOSS Drug Trial was a "seeding trial," the purpose of a "seeding trial" is gain FDA approval for a drug to treat a new condition, or a different population; to expand the drug market and ensure that BigPharma continues to make a killing
figuratively and literally...
It matters to this MadMother.
Does it matter to you?

Link to The Belmont Report and Nuremberg Code:

Geez Becky; I'm sorry this is and has been going on for you. Psychiatry got ahold of my children and I in the 90's when ADHD and Bi Polar were the dx du jour....psychiatry destroyed my life and changed my children forever by these and the related experiences when my role as parent was usurped by the "professionals" who endorsed the abuse and control of my family over my life and my children. As we speak up and find each other perhaps we will be heard.

Susan,
Thank you for your comment. I have no doubt we will be heard. The psychiatric abuse of my son also started in the 90's. I am grateful for how far we as a family have come. We are intact, and many families are ripped apart by the "treatment." Half of the kids in the State-run psych facility have no families to go home to, and there is no plan to change this in the transformation efforts the Washington State is undertaking.

No one is speaking for these children. I can not forget them for even a moment.

I was told by one psychiatrist in 2005 to have Jack McClellan screen her for SZ and I refused the offer because that was going to be placing her in his antipsychotic drug trial he was running at the time!

The child 'treatment' center is a dismal place, and yes almost ALL the kids are foster kids, some lost in the system, the kids i will never forget and who are also always part of my angst. Many times in one private hosp teen ward I was the ONLY parent and these kids were lost souls, I have met some now in the adult system which was even more heartwrenching.

One psychiatrist ASKED me to help change laws for the teen age not to allow 18 to go to Western, to cap it at 21, because he said, "dont forget the foster kids" who are legally on their own them w/out advocates.

It does help to know someone else has seen what I have, God it's awful isn't it?

Stephany,
It is indeed awful. My son was living in conditions that were deplorable. The facility is named Child Study and Treatment Center. It is obvious to me that my son's care was heavy on the study and treatment was inhumane.

I can not forget the kids either; so many called me mom, because I was the one they saw. Where is the transformation effort for the kids who are wards of the State?

You are so right it helps to know that I am not the only one who has seen this ugly reality.