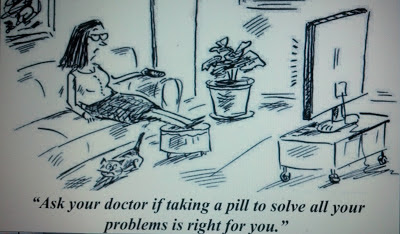 via The Alliance for Human Research Protection:

Conflicts of Interest in Clinical Trials
Presented by Vera Hassner Sharav
14th Tri-Service Clinical Investigation Symposium
Sponsored by The U.S. Army Medical Department
and The Henry M. Jackson Foundation for the Advancement of Military Medicine
May 5-7, 2002

Psychotropic drugs are being tested in children despite the acknowledged risks of harm. Psychotropic drugs are advertised as normalizing a "chemical imbalance" in the brain. In fact, they do the opposite: they induce profound changes in the central nervous system with demonstrable physical and neurological impairments.[48] Dr. Steven Hyman, former director of NIMH, an expert on the mechanisms by which psychoactive drugs work, explained that, whether abused or prescribed, the mechanisms by which psychoactive drugs work are the same.[49] Hyman stated that antidepressants, psychostimulants, and anti-psychotics created "perturbations in neurotransmitter function."[50] The drugs' severe adverse side effects are symptoms of the drugs' disruptive effect on the neurotransmitter system and on brain function.

In 2001 Dr. Benedetto Vitiello, NIMH's director of Child and Adolescent Treatment and Preventive Interventions Branch acknowledged the impact of FDAMA: "pediatric psychopharmacology has recently seen an unprecedented expansion clinical trials in youths has more than doubled in the last few years."[51] Indeed, children as young as three are being recruited to test mind-altering drugs that may affect their developing brain. Parents are being offered financial inducements to volunteer their children for drug trials. The foremost problem with prescribing or testing psychotropic drugs for children is the absence of any objective criteria for diagnosing children with pathological behavioral problems to justify pharmacologic intervention. Vitiello acknowledged "diagnostic uncertainty surrounding most manifestations of psychopathology in early childhood."[52] Vitiello also acknowledged the possibility of long-term harm: "The impact of psychotropics on the developing brain is largely unknown, and possible long-term effects of early exposure to these drugs have not been investigated."

Eli Lilly's highly touted new anti-psychotic, Zyprexa,[53] reveals much about the collision between corporate interests and the health and safety of children. In clinical trials averaging 6 weeks, Zyprexa was tested in 2,500 adults. The drug was linked to serious, in some cases life-threatening side effects requiring hospitalization in 22% of those tested.[24]Acute weight gain of 50 to 70 lbs is usual, and with it the increased risk of diabetes. FDA data (under FOIA) reveals a 65% drop out rate, and only 26% favorable response. During those 6 week clinical trials there were 20 deaths, of which 12 were suicides.[54] David Healy, who found a suicidal link to antidepressants (Selective Serotonin Re-uptake Inhibitors) in his research says, as far as he can establish, the data from these trials "demonstrate a higher death rate on Zyprexa than on any other antipsychotic ever recorded." [55] In 2000, FDA approved Zyprexa for short- term use only, in bi-polar patients. [56]

Yet, children aged six to eleven were recruited for clinical trials to test the drug. According to their published report, UCLA investigators tested Zyprexa on children who were not even diagnosed as having schizophrenia. The children were diagnosed as having a variety of questionable psychiatric disorders, including ADHD.[57] According to the published report, all the children in the trial experienced adverse effects, including sedation, acute weight gain, and akathisia (restless agitation). The trial was terminated less than six weeks after it had begun.

Controversy surrounds a Zyprexa trial at Yale University. In that experiment, 31 youngsters aged 12 to 25 who have not been diagnosed with any psychiatric illness are being exposed to the drug for one year. The stated rationale given by the researchers (who are under contract with the sponsor) is their speculation that these children may be "at risk" for schizophrenia. Since there are, as yet, no objective tests or biological markers for the illness - they hypothesize without evidence, merely on the basis of conjecture. The shaky basis for their conjecture is that assumption that the children may develop schizophrenia because one of their siblings has been diagnosed with the disorder.

The risk of schizophrenia for the general population is 1%. For siblings the risk increases from 2% to 15% - in other words there is 85% likelihood that these children will never develop schizophrenia.

Given the absence of scientifically accurate tools for interpreting psychiatric symptoms, psychiatrists cannot as yet accurately diagnose schizophrenia much less predict which children will get it. Is it ethical to expose healthy children to risks of drug- induced pathology on such speculation? The Wall Street Journal aptly noted that such a study "raises the question of whether the drug companies are mainly interested in "creating" a new illness that requires drug treatment." Read the entire report here

via Alliance for Human Research Protection:

State Medicaid agencies began to question "off label" use of antipsychotics after the December 2006 death of Rebecca Riley, a four-year-old Massachusetts girl whose family received Medicaid benefits. After being diagnosed with bipolar disorder at age two, she was prescribed a cocktail of drugs, including an antipsychotic, court records show.

Some states began moving to require special approval before they would cover a claim for an antipsychotic. A group of 16 states started studying the use of psychiatric medication in children in 2007 in an effort they dubbed "too many, too much, too young," says Jeffrey Thompson, the medical director of the Washington state Medicaid program.

In California, the number of children six and under using psychiatric medications has fallen to 4,200 from 5,686 since a 2006 prior-authorization plan was put in place, the state's top Medicaid official says.

Florida's state Medicaid agency says the number of prescriptions for atypical antipsychotics written for children under age six in the second half of last year dropped to 1,137 from 3,167 a year earlier.

The agency says the decline was the result of a state program started last year under which prescriptions for children under six are reviewed for appropriateness by state-hired psychiatric consultants before Medicaid will cover them.

Washington has created a system to flag the use of psychiatric drugs that may contain too high a dose for young children or have side effects that it regards as particularly dangerous. From May 2006 to April 2008, the system flagged 1,032 cases for review by outside consultants.

Write to David Armstrong at david.armstrong@wsj.com

• MH conditions account for large share of overall illness burden and expenditure -- directly and via impact on treatment and course of co-occurring medical conditions.

• Appropriate, safe and effective use of antipsychotic (AP) and other psychotropic medications identified by states and other stakeholders as high-priority QI issue.  High rates of off-label AP use, often without adequate psychosocial mental health services, are a concern.

• Use patterns vary widely; uptake of evidence based practices highly uneven.  Need for more effective monitoring and management of these powerful but not risk-free treatments.

• Within-class and between-class polypharmacy; dosage; use in children under 6:  “too many, too young, too much.”

• High psychotropic use and polypharmacy in foster youth.

• Use in nursing home (and community) elderly with dementia, despite significant safety concerns and FDA black box warning.

• Monitoring and improving adherence (adult quality measure on consistent use of AP meds in benes with schizophrenia is a good place to start).

Informed Consent protocol for foster kids in Washington State protects the State. Let's be real, who in their right mind would believe that it is in the "best interests" of children and teenagers in the care and custody of Washington State to have no adult/advocate to give Informed Consent for medical care? Adolescents who want and need mental health and/or substance abuse treatment should get it, regardless of familial support or familial status; pretending that kids are physically/emotionally adult enough to legally give Informed Consent BUT ONLY for psychiatric diagnoses, including alcoholism and drug addiction is unethical to say the least...morally reprehensible really. Human brains are not fully mature until the early twenties. In reality, the State of Washington  "legally" placed foster kids in harm's way by relying on a profession with a history of dishonesty, abuse of authority and abuse of "Medical" privilege. As a society, we have in effect deprived of one of the safeguards which may protect them from iatrogenic injury, or worse...