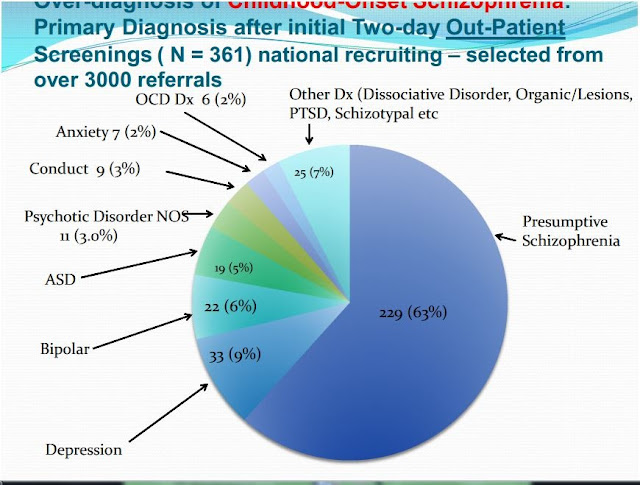 The current psychiatric treatment guidelines adopted by the APA and the AACAP are developed using a quasi-democratic process to achieve consensus. The first line treatment always recommended for a diagnosis of schizophrenia in professional guidelines, practice parameters, and treatment algorithms is neuroleptic drugs.

Psychiatry is obviously NOT an ethical medical specialty! 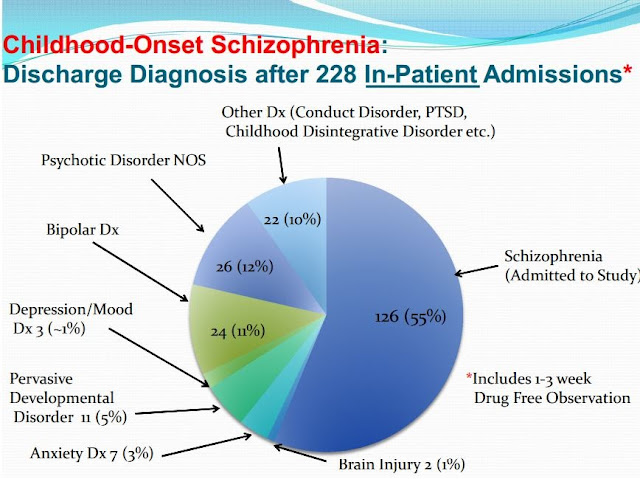 watch on youtube      the slides for Judith Rapoport's presentation

Here is what the NIMH website says about this project:

"Since 1990, the NIMH has been recruiting patients with onset of schizophrenia before age 13. Major goals are to study brain development during childhood and adolescence in early onset schizophrenia patients. Preliminary genetic studies show association with a number of schizophrenia risk genes such as GAD and NRG1, supporting continuity with the adult disorder. In addition, abnormal brain developmental trajectories in patients and their full healthy siblings are seen in relation to risk alleles for these genes. Treatment studies have shown the unique benefit of clozapine for treatment resistant patients. A new study of transient cortical electrical stimulation has begun for control of selected symptoms. (emphasis mine)

"Children and adolescents meeting DSM-IV criteria for schizophrenia are being recruited nationally for a study of the phenomenology, neurobiology and pharmacologic response of childhood onset schizophrenia. Over 300 medical records have been reviewed from which 320 patients and their families, appearing to meet DSM-IV criteria for schizophrenia with onset of psychosis prior to age 12, were screened in person. Of these 225 were hospitalized for medication free observation.  A total of 112 received the diagnosis of schizophrenia at NIMH screening. A large number of children are receiving the diagnosis of schizophrenia improperly resulting in inappropriate treatment, even at academic centers. " here

Remember, according to Judith Rapoport's webinar and the slides she used, of the 361 kids screened for potential participation in the study, only 126 (34.9%) were believed to have schizophrenia at discharge.


The lack of empirical validity means psychiatric diagnosis is unreliable; the fact that mental health professionals have police powers to detain people make psychiatric diagnosis and treatment a risky proposition. The risk of disability and premature fatality are inherent, unavoidable risks for people of all ages who take psychotropic drugs; children and adolescents are known to be have an even greater risk for experiencing adverse effects, including drug-induced fatality. These pertinent facts make Jeffrey Lieberman's claims utterly irresponsible; being without a factual basis, his claims are unethical.

via Hearing Voices Network:
Basic information about voices and visions

Children Hearing Voices: What you need to know and what you can do

Free booklets for parents and supporters