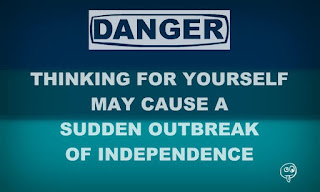 I have given the thumbs up to Minds on the Edge on Facebook, which as anyone who participates on the social networking site knows, means when there is something that this page posts, it is added to my News Feed.   I was reading my feed yesterday and saw the following:


"Minds on the Edge panelist, author, advocate, Pete Earley recently received scathing comments on his blog by people who are adamantly against assisted outpatient treatment, medications, psychiatry and who do not believe there is such a thing as Schizophrenia or Bipolar Disorder. How do you address those critics? (Pete -- keep up the great work. We appreciate your advocacy and passion.)"


My first thought was this program, or at least the administrator of it's facebook page, has come to the defense of Pete Earley by trying to discredit and minimize the importance of the consumer/survivor movement.  This is a program that is purportedly trying to address issues that admittedly are complex and emotionally charged, treatment of and for the "mentally ill."  This person is not concerned with how some of the current language used by the advocacy movement 'for the seriously mentally ill' is representative or even respectful of the people who are consumers of psychiatry, and/or psychiatric survivors to describe their varied experiences.

What I found disheartening was the number of people who found it necessary to denigrate the "mentally ill" people who have found recovery and are giving voice to their concerns.  Many psychiatric survivors are sharing a common experience that in getting services from outside "the mental health system" they have found hope and recovery through using alternatives to traditional mental health treatments.  Many also have determined that the language, e.g. how we communicate meaning and define experiences, causes misunderstanding and additional distress.  Survivors, with the help of supportive professionals and paraprofessionals, develop strategies to help themselves and reach out to help and support each other.  Here is a link to this discussion:
https://www.facebook.com/MindsOnTheEdge/posts/109081345821068

Huffington Post blogger, D.J. Jaffe, was one of those who responded. (update 2-18-2013 Jaffe's comments have disappeared from the comment thread since I originally posted this article) Jaffe is seemingly unable to learn from or respect those who have a different perspective on the problems caused in mental health discussions by language and semantics; even when the individuals belong to the group of people he claims  to advocating for. He states, "It has also been interesting to me that  some people who claim to be 'advocates' for people with "mentally illness" simultaneously claim it doesn't exist." In his comment was a link to a couple of documents, one from people opposing Kendra's Law like NYAPRS, and others, which court orders what is called, "Assisted Outpatient Treatment" and the response to these individuals from kendraslaw.org, which is a Treatment Advocacy Center project.  Mr. Jaffe is indeed an strong advocate, for TAC, Court ordered treatment, Kendra's Law, and NAMI; which is not the same thing as advocating for people diagnosed "mentally ill."  Jaffe denigrates the consumer/survivor movement, and seems to believe changes in the language which more accurately and respectfully represent various individual perspectives and experiences that are contrary to his own, are absurd.

Dj Jaffe It has also been interesting to me that some people who claim to be 'advocates' for people with "mental illness", simultaneously claim it doesn't exist. Their argument is that every organ in the body can get impaired, diseased, malfunction, etc., except one: the brain. Pointing out this absurdity helps. Also see the two documents at http://sites.google.com/site/oppositionanalysis which address some of the objections raised and answers them.

There are three of the twenty issues that the second report, written by TAC, via kendraslaw.org claims to address that I am going to share my opinions on, roman numerals IX, XVIII and XX.

[ix] The law was proposed before Ms. Webdale was pushed to her death. It was first proposed by families of the mentally ill in the 1980s. The law at that time required an individual to be “danger to self or others” before they could be treated over objection. Families wanted a law that would prevent dangerousness, rather than require it.  The law they suggested was piloted in NYS as the Bellevue Outpatient Commitment Pilot Program (starting around 1995). In 1999, when Ms. Webdale was pushed, the public safety benefits of the pilot program became apparent, and advocates for the mentally ill were joined by those in the public safety community, hospital workers, hospital associations and others. The result was the passage of Kendra’s Law.


[xviii] The development of Assisted Outpatient Treatment was based on the desire to help individuals with serious mental illnesses who are so ill, they cannot recognize they are ill (anosognosia).  It properly balances the civil rights of individuals with mental illness, their right to treatment, and the safety needs of the public. It is a more compassionate, less expensive than it’s alternative: involuntary inpatient commitment.

[xx] We don’t know where this statistic comes from or its relationship to Kendra’s Law. Researchers found Kendra’s Law recipients had a 55% reduction in suicide attempts or physical harm to self. This would be expected to, although it hasn’t been studied, to lead to an increase in life span, not a decrease.  kendraslaw.org

Kendra's Law, "was first proposed by families of the mentally ill in the 80s."   I wonder why this group is not identified by name?  It is an organization of  "families of the mentally ill" who changed it's name a handful of years ago to more accurately reflect what they were doing.  It seems disingenuous and lacking in ownership for the idea and it's implementation in virtually every state in the nation; which this same group has driven, with funding from the pharmaceutical industry.  An organization that once claimed to be "for the mentally ill," now is an alliance "on mental illness."  I wonder if this change was suggested by the pharmaceutical industry that provides the bulk of it's funding and the expertise that this organization treats as gospel?  The new name implies an NAMI is an 'authority.'


It occurs to me that NAMI is the organization that proposed Kendra's Law, on the advice of E. Fuller Torrey and TAC.  This supposedly, "grass roots" multimedia machine has pushed similar legislation using it's political influence to gain Government support, by having it's members acting as unpaid lobbyists for the pharmaceutical industry, instead of "advocates for the mentally ill."

I found 18 to lack substance or credibility, given that it presupposes a person's experience, symptoms and what they mean as being only definable by a professional or some one other than the individual himself.  If the individual disagrees, they must have "lack of insight."   This is shortsighted and does not even acknowledge the very real risk of a difference of opinion becoming the basis for the label.  To me, it seems that this attitude is evidence of a lack of insight on the part of the advocates and the professionals who lacks understanding of their own stated mission to "advocate for the mentally ill."

20 is a response I found beyond incredible.  "They continue to state national statistics that people who have been treated as "mentally ill" die an average of 25 or 30 years younger than their contemporaries."   In response, TAC claims the basis of this claim is unknown to them.  As if  it is not well established in multiple studies that these medications that are the front line treatment offered and even recommended as so necessary that people who do not want this "treatment" must be court ordered to receive it, cause iatrogenic illness, disability and early death for long-term users, sudden death for some, and that children and the elderly are more susceptible to the risk.


For me to deny these facts is to ask me not to see my own son when I look at him; or my friends who, like my son, all have altered levels of functioning, cognitive abilities, and a general decline in physical health; documented as being caused by the treatment each has received.  It is insulting to anyone who has read a single one of the peer reviewed studies on the iatrogenic illnesses caused and the poor outcomes including shortened lifespan.  It is in fact to deny the every day reality of the many of the very individuals who have been harmed by the treatment forced upon them, "in their best interest."

I have a question for the advocates "for the seriously mentally ill" who persistently insist that they are advocates for the people with psychiatric diagnoses:
Where is your "advocacy" for those who are victimized by anyone even if (especially when) the perpetrator is a mental health professional?

More than anything else the deafening silence of "advocates for the seriously mentally ill" speaks directly to their intent to serve the needs of "the mentally ill." When the "mentally ill" are victims of crime-silence has a reverb. Advocacy for people victimized diagnosed with a mental illness is absent altogether.

These self-appointed advocates use crimes committed by a sub-set of the group they are 'advocating for' as justification for mandating public policy in which coercion of people in crisis is standard practice; and forced treatment is the goal.  At the same time, these 'advocates' fail to advocate of the behalf of "mentally ill" people who are victimized by crime---even if the perpetrator is a mental health professional!  Where is the advocacy for laws and public policies to hold those who  victimize our most vulnerable friends and family members accountable?  Indeed, psychiatric survivors are the ones who lead the charge when it comes to advocating for those who are victimized because of a psychiatric diagnosis.

The quotes below are some things that Pam Hyde said in reference to the language used by various stakeholders, and the need for changes.
I worked with others to embrace the journey of recovery and the many individualized pathways that journey takes. I argued against the notion that simple behavior change could solve all this; that our field is the only place in which behavior out of the norm is what leads to treatment and services more than an individual’s need." Pam Hyde   italics mine

"The medical model of “disease” is not consistent with the experience of people who believe they are simply unique individuals labeled for not conforming to this world’s expectations."  Pam Hyde

'“Survivor” is real and yet too political, as if the system and treatment are dangerous in their own right."  Pam Hyde