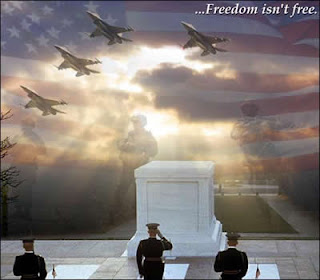 The Sentinels Creed:
My dedication to this sacred duty is total and wholehearted. In the responsibility bestowed on me never will I falter. And with dignity and perseverance my standard will remain perfection. Through the years of diligence and praise and the discomfort of the elements, I will walk my tour in humble reverence to the best of my ability. It is he who commands the respect I protect. His bravery that made us so proud. Surrounded by well meaning crowds by day alone in the thoughtful peace of night, this soldier will in honored glory rest under my eternal vigilance.


More veterans than fought and died in Vietnam,returned home to ultimately take their own lives; a fact that is indicative of the fact that we, as a society, have not given the effort our veterans deserve.  The efforts to effectively reach out and help are good; but fall short, too often.


Couple this grave statistic with the current veterans coming home from Afghanistan and Iraq, who are devastated  by trauma and it's effects.  We are still failing our returning Veterans of Foreign Wars.   Now in addition to surviving the battlefields they need to survive the treatment provided by bio-psychiatry and it's devotees and practitioners.  The effort to medicate distress, with dangerous drugs in combinations known to be fatal, have already killed more than a few.   In fact this practice of prescribing  multiple medications, has caused some physically healthy men who served the Country to die in their sleep, while in their twenties.  It is inconceivable that it is possible to prescribe what is known to be a deadly combination of psychiatric drugs under the Ethics Guidelines of the AMA for Informed Consent; to say nothing of the Hippocratic Oath to "First, do no harm" and be allowed to continue to practice medicine. What in God's name would make a physician to do such a thing?

It is a National disgrace.  Our walking wounded returning from the fields of battle in Iraq and Afghanistan suffering from PTSD, for which they receive "treatment" that may be "standard practice" but is not evidence-based or therapeutic; it can be fatal.
Fred Baughbam, Jr. M.D. report to Army Surgeon General on veterans dying in their sleep Rense Report


Remember I started this post with a terrible fact about the high rate of suicide of the veterans from the Vietnam era.  Veterans of Iraq and Afghanistan who are traumatized and experiencing equally tragic consequences of the medications that are being given  to them to "treat" their distress.  Specifically, the SSRI antidepressants which are known to cause homicide and suicide; and dozens have ultimately killed themselves and others. How is it possible that the FDA approved drugs known to provoke homicidal and suicidal behavior?


Here is a link from The Alliance For Human Research Protection on the suicide risk of SSRI antidepressants: Suicide Risk of SSRIs

I started this blog, "Involuntary Transformation" to tell the world what had been done to my son.  I was then, and am now, a mother who is outraged at the lack of ethics and accountability that I have seen in the mental health, justice, social welfare and legal systems.   More than seen, have been protesting, filing reports about the crimes that have been perpetrated against my son and my family.  I had no idea that my endeavor would lead to the awareness and utter increase in stress and fear that it has.


I cannot help but think that there is an recurrent theme that is at the root of what we allow to happen and in so doing are complicit in the injustice that occurs.  The root is a lack of regard for human life and liberty; a lack of moral and ethical conduct in the pharmaceutical, psychiatric, academic, legal and government entities who are involved in the mental health side of the human services, educational and justice systems.  Individuals who do not follow the laws which protect individuals Civil Rights under the U.S. Constitution are allowed to continue doing so; with seeming impunity.  The injustice inherent in the system is due to this lack of accountability.  More than anything, it is evidence that we need to think of injustice as an evil, not merely a lack of justice.


Rick Banyon, an American writer and critic defines evil in A Skeptic's Dictionary as: Evil: Archaic judgemental term formerly used to insult the ethically disadvantaged and the morally challenged. It is more than this, and requires action taken against it for the threat it is.


Veterans who help in dealing with the devastating effects of trauma in service to Our Country, must be treated with honor and integrity; not in ways that cause further harm, disability and even death. People can be ordered to take medications that can and do kill.  The practice of psychiatry, and pharmaceutically funded mental health policies and practices are in reality, a betrayal of trust, medical ethics, and the U.S. Constitution. This is something worth fighting against.


"He who does not punish evil, commands it to be done."
Leonardo Da Vinci

"Every person has the choice between Good and Evil.
Choose Good, and stand against those who would choose Evil."  Friedrich Kellner

My wife and I went to the Veterans Day Parade in Fort Worth, Texas this year... It was special.

Veterans from each of the wars, inluding World War II... with vintage Willis Jeeps and uniforms with 48-star patches... men in their late 80's and early 90's.... Sadly there were fewer this year than in years past. We felt so grateful to see the few that are still with us.

It's easy to see how you would see your dad as a hero - they were... they were truly our "Greatest Generation"... so humble.

Thank you for your putting up links for military service members and veterans, getting the word out on the dangers of psychiatric drugs, and other safer methods of treatment.

I believe it is a sense of honor and integrity that compels ordinary people to do extraordinary things that are in fact heroic. My Dad is my hero for so many reasons--all of them emanating from his sense honor and integrity; which were intrinsic to his character.

It is because of him and my awareness of his and other veteran's sacrifices that I am able to live the life that I do.

With gratitude, for my Dad's service and every other veteran's service to Our Country, I will continue to be the daughter I know would make my Dad proud.

If my advocacy helps anyone besides myself even a little, it is well worth the effort.

Blessings to you and yours,