In Honor of My Father Who Served Our Country

Thank you for your service!
Please keep our Active Military, our Veterans
and their families in your prayers.

The sacrifices that are made by the men and women who serve in our military are beyond what most of us can truly imagine. I take this service and the sacrifices it requires, personally. I'm grateful for the sacrifices made by America's Veterans to preserve and defend the Constitution of The United States of America. 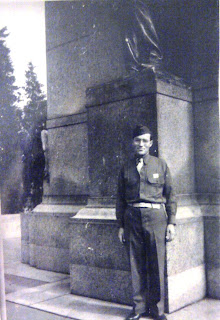 My Dad never spoke of his service in the Army Air Corps during WWII, or the Commendation he earned but never claimed. Knowing the kind of man he was, I know he would have not thought it would have been fitting for him to do so. What is amazing to me is, he did not tell any of us. It was only brought to light by my brother Mark, who was interviewing him in order to help him finish his autobiography. My Dad had been writing his story down for a few years because I had asked him to; and he was unable to finish it on his own. My Dad had a stroke three years before he died, and was not able to write and spoke with great difficulty. When I first asked him to write his story, he seemed to think my request odd. He was, in reality, a humble man who did not think he had lived anything but an ordinary life.

When I reflect on it, his failure to share this part of his life with his family actually makes total sense; given the man I know him to have been. The fact that he had performed his duty heroically; was not something to boast about. To him it was what it was; a responsibility that he met successfully, by the Grace of God. My father was formally recognized six months before he died in 2004 for his Distinguished Service to Our Country. It was to me official recognition that my Dad, who by then was laid low by age and infirmity, was the hero he always had been to me and my boys. The look on his face to find that his efforts for all of us were thought so highly of, is one of my greatest treasures.

The last time I held my Dad's hand, I remember thinking, "How lucky I am, he's my Dad." I told him, "I love you Dad," and watched him struggle to speak when he said he loved me too. In that moment, it was easy to remember the feeling I had when I was a little girl; when I knew for certain, my Dad is the strongest man alive. He was a man who did great things; and somehow I knew then as I know now, my Dad was the strongest man, in every way that matters.

My eldest son, Nathan, told me the other night that he asked his Grandpa what it was like to have been be at Normandy. Nathan recalled with such pride in his voice, "I'll never forget, Kenneth George Murphy said, 'It smelled like gunpowder, and that's all you need to know'"

Becky, I never knew you were so eloquent! The way you spoke of your dad and the way he was is touching. Without being wordy or "too much" you brought to all of us the true essence of the man you love and honor. Thank you for that. I only wish that all fathers could be looked upon as heroes and larger than life, but sadly that isn't so. I envy you that part of your life and only pray that our children will one day be a hero to their children. I too pray for all of our brothers and sisters who so selflessly serve our country to ensure that we keep our "freedoms" and way of life. I pray that with them in my thoughts daily that I will never abuse these privileges. Once again, thank you for sharing your hero.

Thank you for your very nice comment. It means a great deal to me that you understand and appreciate how I feel about my Dad. Bless you.