Flawed Data Accepted by The FDA

Kudos to SYLVIA PAGÁN WESTPHAL!   Trial and too many errors - The Boston Globe Sunday Op-ed piece is a well written critique of what "evidence-based" means in real world practice---and it does not seem to have much to do with science; the "evidence-base" is not in fact compiled from all the relevant data/evidence. 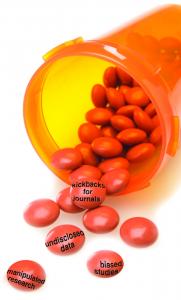 In the side bar of this editorial are some ugly facts about the dirty dog marketing of Seroquel, by AstraZeneca---Seroquel is a neuroleptic, a drug which gained FDA approval based on bullshit "evidence" in the first place; it was then illegally marketed and used in thousands of children, before it's eventual FDA approval for use in children---the majority of the "off-label" *EXPERIMENTAL* use, prescriptions written for children on Medicaid a direct result of illegal marketing of the drug by AstraZeneca.  Prescription costs were fraudulently billed to Medicaid--and paid on hundreds of thousands prescriptions, bilking the Medicaid system to make the drug companies and their stockholders billions in obscene profits--even after paying massive fines, for their illegal marketing. The FDA does not protect the people of the United States, it is a rubber stamp seal of approval for the drug industry--What do the letters stand for Flawed Data Accepted!?!

Continuing these dirty tactics, Johnson and Johnson's Seroquel is currently being compared to Depakote ER, manufactured by Abbott at a Tuscaloosa Veteran Medical Center.  It is another unethical "drug trial" using Veterans with dementia to test drugs in what is known as a 'seeding trial.'  A seeding trial is conducted only to expand the market for  a particular drug, in this case, Depakote ER.  This "drug trial" is wrong on so many levels.  I say this is an unethical drug trial for a variety of reasons:

1. Informed Consent---who is providing consent for these people, having dementia precludes them from being able to do so for themselves...Who is deciding to risk these Veteran's lives to expand the market for Depakote ER?
2.  Both of these drugs are known to cause a marked increase in MORTALITY in this age group!(Black Box warnings are being ignored)
3.  The purpose of the clinical trial is to expand the market for Depakote ER as a Chemical Restraint for  elderly patients with dementia--this is NOT a trial which actually has the purpose or intent to directly benefit, heal or 'treat' the elderly people who will be taking either of these drugs in this ongoing drug trial!  It is solely to enrich Abbott, maker of Depakote ER; not to improve the physical health of the patients who are being enrolled and used in an experiment which may in fact cause them to die.