I Came Here to Heal and Raise my Children 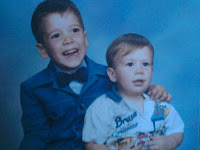 I came here, to the place I was born to heal; raise my sons and have a good life in a place I felt I belonged.  I wonder sometimes now, what the heck was I thinking?  I want to believe goodness exists in people; but after the last 17 years, I am finally having some real serious doubts.  I don't like it, but I don't understand how or why I have had the misfortune of dealing with so many who have no ethics, no moral compass, and no sense of duty.  It isn't exactly like I'm the church lady; or have unrealisticly high expectations, for goodness sake!

I went and spoke with a man who was unhappy with what I had to say; and understandably so.  He seems like a good guy, but whether he is or not remains to be seen--I was not as composed or as serene as I would have liked.  Honestly I only determined to have the conversation upon realizing---there is a remote possibility that he isn't aware of what the facts are, and raced out the door.  Well, he heard a story I don't think he'd heard before---he honestly looked surprised and said he would look into it.  He made no promises.

This isn't "just a story" I'm telling----It isn't my type of story----it has been a real life horror story ever since I have come here to heal and raise my children.  I have much more to heal from, as do both my sons.  Imagine in real life, seeking help for your child to ultimately have your traumatized child further abused, further traumatized, and ultimately disabled by "professionals."

It is a story that should not be any one's American Experience, but it is mine.  I know that the US Constitution is MY American Gospel.  I wonder what rules the 'professionals' use?  Are they held to any standard?  It doesn't look like it from my perspective.  Having Laws passed to codify coercion and control of vulnerable people and calling it 'medicine.'  Using the Courts, Police and Powers of the State to effectively strip people of their Individual Rights under the Constitution, and subject them to Human Experimentation using neurotoxins.  It really is not surprising when it is looked at from this perspective, that perjury and forgery are committed by 'mental health professionals' without thinking.

Becky - This is such a painfully heartfelt post. Very well said, on a topic I know is not an easy one. As a fellow mom, I cannot begin to imagine going through what you've gone through, nor seeing my child traumatized repeatedly by those who are supposed to "help." Good for you for continuing to tell your story and for creating change by sharing your voice and your truth. We are slowly but surely tipping the scales toward reform and justice on this front - and stories like yours are crucial to that end. Thank you so much for everything you do.

I'm sending peaceful healing vibes to you and your sons!

Becky...my experience was very similar to yours with me and my children becoming victims of psychiatry and the "social" "welfare" system that we ended up in after I was crippled by the drugs and became impoverished. I"m so sorry you had this experience.