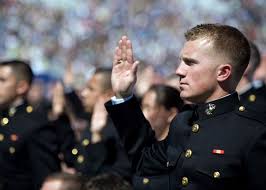 Federal law requires everyone who enlists or re-enlists in the
Armed Forces of the United States
to take the enlistment oath.
The Oath of Enlistment - US Military


The text of the oath taken by those who enlist in all branches of the Armed Forces:
.I, [name], do solemnly swear (or affirm) that I will support and defend the Constitution of the United States against all enemies, foreign and domestic; that I will bear true faith and allegiance to the same; that I take this obligation freely, without any mental reservation or purpose of evasion; and that I will well and faithfully discharge the duties of the office on which I am about to enter. So help me God.[1] Wikipedia United States Uniformed Services Oath of Office

Members of the Active Military who seek assistance for dealing with PTSD, or any other mental health issue are, like most Americans, prescribed psychotropic drugs; unlike most Americans however, once they are prescribed they are then subject to being ordered to take them as prescribed by Commanding Officers.  Even if they do not help, or cause "side effects" which are intolerable or prevent the soldier from performing their duties effectively.

All officers of the seven Uniformed services of the United States take swear or affirm an oath of office upon commissioning. It differs slightly from that of the oath of enlistment that enlisted members recite when they enter the service. It is required by statute, the oath being prescribed by Section 3331, Title 5, United States Code.[1] It is traditional for officers to recite the oath upon promotion but as long as the officer's service is continuous this is not actually required.[2] One notable difference between the officer and enlisted oaths is that the oath taken by officers does not include any provision to obey orders; while enlisted personnel are bound by the Uniform Code of Military Justice to obey lawful orders, officers in the service of the United States are bound by this oath to disobey any order that violates the Constitution of the United States.[3]

The drugs used are to alleviate symptoms, the drugs do not in fact treat the conditions known as PTSD and Bipolar disorder; and are often the same drugs,since these two diagnoses have many of the same symptoms.  Bipolar disorder, was recently declared by Thomas Insel, Director of the National Institutes of Mental Health, to be the leading cause of suicide Our Veteran population. http://involuntarytransformation.blogspot.com/2011/03/scientific-standards-and-ethics-needed.html


Drugs used to "treat" Bipolar disorder are, in many cases, statistically, only slightly more effective than placebo; all of them have some very serious risks: some of these risks are "drug effects" that can be permanent and debilitating to the point of disability and death; even if one stops taking the drug!  Antidepressants can actually cause an increase in suicidal thoughts, how is this an acceptable risk for a "treatment" that is barely better than a sugar pill?!


Many of our troops are given neuroleptics to "treat" Bipolar disorder and PTSD.  The effects of trauma experienced by Veterans who serve Our Country in combat are seldom left on the battle field; detrimental effects of trauma are problematic for many Veterans for years.  Neuroleptic drugs, at one time, were only used to treat Schizophrenia, and other types of psychosis, and do a damn poor job of "treating" the symptoms they have been used for since  first being developed in the 1950s, contrary to the propaganda of the American Psychiatric Association and the Pharmaceutical industry.    Approximately 40% of those with a diagnosis of schizophrenia do not achieve a beneficial reduction in their symptoms, but still experience the drug's "side-effects" which are debilitating and are, in reality, the direct effects of neuroleptic drugs.  The debilitating effects of neuroleptic drugs are in reality, the symptoms of drug induced iatrogenic illnesses!   Long term use of neuroleptics cause life expectancy to be reduced by an average of 25-30 years.


A common effect is a condition called Akasthesia, a relentless, inner restlessness which is closely associated unprovoked aggression and violent behavior.  My son has Akasthesia as a result of taking neuroleptics, and has had it for many years.  It causes him to pace for hours.  The few times he has described to me how this "inner restlessness" which fuels his need to be in perpetual motion, feels; it has horrified me.  It breaks my heart to know that this tortuous, common effect of neuroleptics is referred to as a "tolerable side-effect" by so-called "mental health professionals."   Mental health professionals inexplicably believe the tolerability of any and all "side-effects"  can be determined by "mental health professionals," without the patient's input!


For the Military to function, a strict code of discipline is required.  I understand this.  I would like to ask all Commanding Officers in all branches of Our Armed Forces to consider that ordering those under their command to take dangerous psychotropic drugs may have tragic unintended consequences for their troops, psychotropic drugs can cause individual troops to be ineffective or unable to serve, and/or trigger a fatal adverse event.


My son was used in pediatric Drug Trials funded by the NIMH without my permission and without willingly taking them.  My child was told if he ever wanted to go home, he had to take massive amounts of several teratogenic drugs.  My son wanted to be so many things, and still does.  One thing he will never be allowed to do is serve in any branch of the Military; he will never be allowed to become is a soldier.   He was heartbroken when I told him this a couple years ago; and asked, "Can't I at least go to Basic Training?"  I am just a mom who Loves the Constitution of the United States of America!   I will protect and defend it the only way that I can, and my Involuntary Transformation blog is what I can do; and still take care of my son who is now disabled.

"God grant me the courage not to give up what I think is right
even though I think it is hopeless."
Chester W. Nimitz

"I believe we must speak our conscience in moments that demand it,
even if we are but one voice."
Richard B. Sanders

"Whenever a doctor cannot do good, he must be kept from doing harm." Hippocrates

Thank you to all the men and women past and present, who serve The United States
with honor in the United States Military!
I am forever in your debt!


American Veterans Are Being Drugged to Death


American Veterans: They Made It Back Alive To Die Here At Home