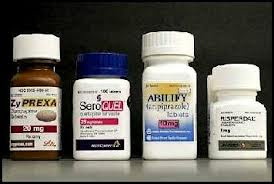 Neuroleptics, referred to as "antipsychotics", are drugs that at one time, were theoretically only prescribed to people (adults) who were diagnosed with schizophrenia, or another diagnosis for which psychosis is a symptom. These drugs are now the most frequently prescribed psychiatric drugs--and are even being prescribed to children for behavioral issues, ADHD, and the current diagnosis de jour, "bipolar disorder" in spite of the lack of validated research justifying the drugs' safety or effectiveness for treating any psychiatric diagnosis in children. At the very least, the wisdom of "treating" all these diagnoses with such dangerous drugs is suspect; neuroleptic drugs alter the functioning of the entire parasympathetic nervous system and none of the conditions being "treated" result from a dysfunction in the parasympathetic nervous system! The function of the eyes, the entire digestive tract from the throat to the rectum, the brain, the heart and the lungs; the metabolic, endocrine and hormonal systems and all rely on the parasympathetic nervous system to function properly.

Why are these drugs being given to children? They can and do cause dysfunction where none previously existed; whatever a child's diagnoses, it seems an odd "treatment" strategy to give them drugs that can and do cause dysfunction. According to Jon McClellan in the "Practice Parameters" he wrote for using these drugs to treat schizophrenia in children and adolescents: 50% are expected to develop Tardive Dyskinisia; a potentially permanent and disabling "side-effect," which is not always alleviated by withdrawal from the drug that caused it!

In discussing "evidenced based" drugs used in mental health treatment for this population, I find it more than a little strange Quack Master Jack did not even mention this class of drug AT ALL. The article is from the year 2005, and by then, it was nine years since my son had first been given the antipsychotic, Risperdal, a full decade before it was approved for pediatric use. Dr. Jackass, as "the lead researcher for childhood onset schizophrenia" had prescribed this type of drug himself for at least that long---why is there no data to cite in 2005 or to share in his article, on evidence based treatments? Is there no data to support and justify the prescribing of neuroleptics in real world practice to children for any diagnosis? Why else would this expert on childhood schizophrenia fail to cite any evidence for the supposedly "evidence-based" prescription of neuroleptics to children, not even for childhood or "early-onset" schizophrenia?

How did neuroleptics become so frequently prescribed "off-label" with no clinical trials recommending this practice? What I find incredible is how in the hell can the psychiatrists in this Country have recommended using this class of drugs on children "off-label" for so long, and there is still a supposed paucity of research to validate their use; nonetheless, neuroleptics are prescribed to children. It is now a "standard practice"?!

Why did the FDA approve more of these poisons for use in children after the TEOSS trials were completed? What exactly were the basis for the approval? 12% of the kids enrolled in the TEOSS trials were 'effectively treated,' the drugs are not 'safe' and obviously, not very effective. Now these drugs are used casually "Off-label," when they are minimally effective for the condition they were developed to treat. The prescription of drug needs to be based on something more that a consensus of opinions for God's sake! FDA approval needs to be based on higher standards of safety and effectiveness than the neuroleptic drugs have demonstrated. Using these dangerous drugs so casually off-label for symptoms caused by environmental conditions is morally reprehensible and is certainly not ethical medical practice! Drugs prescribed to children should be based on being safe and effective and should be prescribed only for treating actual medical conditions; this is not the case with psychotropic drugs in standard clinical practice. Neuroleptics are not safe and effective for their original use as "antipsychotics" to treat schizophrenia, since about 74% of those diagnosed with schizophrenia do not benefit from an appreciable reduction of symptoms with them. Neuroleptics also have some very serious risks which is why their use was so limited. They are not any more safe or effective, more than 60 years after they were first used, yet these harmful teratogenic drugs are now used for a variety of conditions in spite of the risks.

The newer more expensive atypicals are NOT MORE EFFECTIVE OR SAFER, according to numerous studies, yet are prescribed more often; the vast majority for conditions or symptoms the drugs are not known to actually treat. This questionable practice is mostly paid for by the Federal Medicaid and Medicare programs, and is responsible for a great deal of the fraudulent claims being submitted which puts States at risk for being held liable for the fraudulent claims submitted. I am disgusted with psychiatry and it's unethical "medical model" which leaves people sicker and disabled far too often. It's unholy alliance with the pharmaceutical industry coupled with a failure to gain any true insight into a how to help, not harm, a significant percentage of the people who seek psychiatric care, begs the question, how do they continue to get away with this fraud? Why are these drugs now used on children with a myriad of diagnoses and for behavioral problems? If the prescription choice is not made based on an the evidence base, how can it be ethical to prescribe neuroleptics to children? They are not strictly speaking, safe or effective when used for adults with scizophrenia and even less effective and more dangerous for children with a diagnosis of schizophrenia. They cause illness and early death, always have. They cause permanent neurological and metabolic damage, sudden death, and early (25-30 years early) death, always have.

Ultimately, the psychiatric profession failing to show compassion or responsibility for those who have been harmed and disabled by the "safe and effective" drugs psychiatry has, at times, forced upon them by Court Order; is very telling. In failing to even acknowledge the existence of these people; in the present or historically, it is evident that psychiatry as it is practiced in the mainstream, is not at heart, a "medical" or "healing" profession. No individual or profession can claim victory without owning the failures along the way...

Kids Dying From Off-label Use of Antipsychotics  Evelyn Pringle 2006

There is no such thing as an "antipsychotic."
These drugs should be called "neuroleptics".
Actually, I like the term the late Abram Hoffer, M.D., Ph.D. used to describe them, "tranquilizers."

To believe that "antipsychotics" need to be used as "maintenance" drugs is to believe that the only way a human being can become more tranquil is to use mind-altering drugs.

The idea that these chemical agents are now being used for everything from anxiety to depression is absurd.

The idea that they are using children to increase market share is CRIMINAL !

Michael Fitzpatrick and the management team at NAMI National ought to be ashamed of what they've done!

When I wrote that there is no such thing as an "antipsychotic", I was not referring to your use of the term.

In fact, you seem to prefer to call them by their more appropriate term, "neuroleptic".

I was referring to the term, "antipsychotic" as it is used by most mental health professionals, psychiatrist, etc.

I just wanted to quickly clarify, and make it clear that it was not meant to be critical of you, but of "professionals".

What puzzles me is why and how did this class of drugs come to be passed off as "treatment" for so many different diagnoses?

What these drugs do is cause brain damage, disability and shorten the life span---this happens to people who benefit from their use, by a reduction in symptoms of psychosis. These effects happen whether or not the patient is "helped" by taking them or not. Many do not experience any appreciable benefit which would justify the serious risks of taking these teratogenic drugs.

That psychiatry insists these are "safe and effective" while it continues to deny the existence of it's victims, who were not "safely treated" with neuroleptics; it is obvious to me there is a serious disconnect between what is known about these poisons and what is shared with patients or parents of children to whom they are prescribed. Psychiatrists do not share what these drugs actually do, I have attempted to have a factual conversation with several over that last ten years---NOT one would acknowledge the risk of death and disability or the obvious cognitive decline they have been causing my son. NOT ONE. One, (the Medical Director of a Community Mental Health Provider) actually stated what Isaac's diagnosis is, does not matter---he was unwilling to discuss the actual effects of the drugs AT ALL, period. It is obvious to me that whether any patient with particular diagnoses thinks, feels, or experiences is NOT considered important although theoretically, patients certainly do have rights to have personal preferences considered; in reality, the patient's who voice objections are dismissed out of hand. That has been our personal experience. I say this because prior to going to another County for Isaac's care, 2 psychiatrists in two different clinics in our home County refused to have a dialog about the drugs prescribed and the detrimental impact on Isaac's overall well being.

Once these drugs are given it seems, whether they harm or not, help or not, it is not to be talked about?! Informed Consent is supposed to be an ongoing conversation, not a done deal, if the patient is taking these harmful teratogenic drugs! The reality is unethical professionals do not wish to be forthright, or HONEST with patients or parents of children whom they have prescribed these brain shrinking chemicals---without giving them adequate information or appropriately informing them of the risks of increased mortality and disability, which are well documented,inherent risks. I featured a parent from Texas whose 13 year old son died as a result of taking neuroleptics as prescribed, who was not even told it was possible in this column on December 17, 2010.

The deaths of these children is not only enormously tragic, it is also NOT necessary!

Paxil (for irritable bowel) induced a "manic episode", he was then diagnosed as "bipolar" and placed on a cocktail of drugs. This is very common, by the way.

He has since fully recovered. FULLY recovered!
He is thriving !

It's a distant memory now to our family.
He chose to come forward six years ago, in the hopes he could keep other families from having to go through what ours went through.

Becky; its a great work you are doing here; raising awareness of the many issues as you do. I was recently reading in Gwen Olsens book "Confessions of an RX drug pusher" how the drugs she was pushing originated under Nazi reign and the psychiatric abuses at that time were condemned by us - the US - and now our government has spent the past 60 years endorsing the use of these same drugs on our own citizens. (I don't recall the specific drugs she was talking about but I've seen quite a bit that the Nazi reign was a source of many of the drugs today pushed by the FDA and Pharma).