My brother Jim died in 2009 after fighting brain cancer for a year.
Today is the anniversary of his birth.


The Chutist
To fly is to live.
Letting your spirit soar.
Being totally free.
Separating your dreams,
from hard reality.
The descent is...
a suspension in time.
To glory in the feel
of being timeless.
To rely on only
yourself.  A part
of the winds.
Written for my brother Jim on 3-21-1993

Jim loved to skydive and I went up as an observer once. I got a little taste, and I can  understand just why he loved it so much. I wrote "The Chutist" while I was waiting for him to take one more jump---he had to do it just one more time. He truly loved it.

I wrote this when he died:
We are all brothers.  I knew this first by faith and then through experience. I am fortunate to have several, and I am grateful for all my brothers.  It is through God's love for us and our brotherly love for each other, that we edify one another. There are moments of time some fleeting, others of longer duration, when I am aware of how the virtue of brotherly love has been demonstrated solely for my benefit.

I have no doubt that the Winter of 1993 was one such time. I had been suicidal since grade school.  I would not admit to another human being that my first attempt was when I was 13 years old, until I was 29.  My brother Jim is the first person I told that I had been trying to kill myself since I was thirteen.  He told me that he didn't want me to die.  He asked me to promise him that I wouldn't try to kill myself for him. I promised that I wouldn't; eventually, I realized that I wanted to live,  no matter what.  I have not been suicidal since.

It has been 16 years, since that time, I have lived as long as I had tried to kill myself. I believe that my brother Jim was my guardian angel; he listened to my insanity, and shared how he had dealt with his own. My brother Jim demonstrated how to survive temendous losses. He convinced me that I was worth the effort. He had the will for me to live, until I had it for myself. I know what "I am my brother's keeper" means.

I know this: I will remember always when my brother Jim was mine.

Jim's favorite musician was Tom Petty. The day he went "free falling" for the very first time, he got pulled over for speeding. He was roaring down the highway at 80 miles an hour; singing at the top of his lungs to one of my personal favorites: 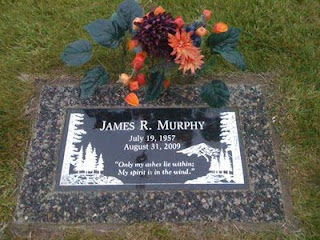 Thanks for sharing this...

Bless you and your brother. Thank you for posting this.

Becky; I'm so sorry for the loss of your brother yet I can see that you are celebrating his life. Thank you for sharing this. Susan

Thank you all for your support and prayers. This post is indeed meant to celebrate my brother Jim's life, as well as honor the part he played in mine.

RIP Cousin Jim. Thanks for sharing this, Becky. What a touching story. God Bless you! Hugs :)

Very cool memorial. I didn't really know Jim but it sounds like he was a great guy. We are all here for only a moment and it looks like Jim's moment was a glorious one. I pledge ,from this point on, to work as hard as I can to make my life a meaningful one. Thanks, Becky.

Thanks Damien. You're a good egg.