Scott Olsen, 24, in hospital with fractured skull and brain swelling after allegedly being hit by a police projectile in Oakland" 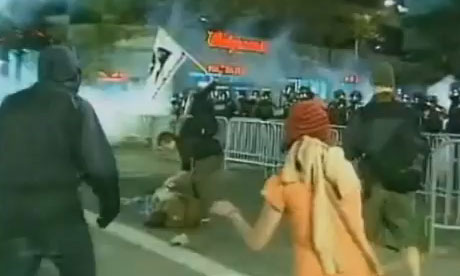 Occupy Oakland: Scott Olsen suffered the head injury during protests on Tuesday evening. Photograph: screengrab via YouTube
read the article here.
the video below shows something being tossed at 38 secs. into the video which explodes on the ground a couple of seconds later dispersing some of the people gathered around Scott Olsen who remains in prone position on the ground.
via the Guardian Occupy Oakland protests - live coverage