The human cost of well-organized crime 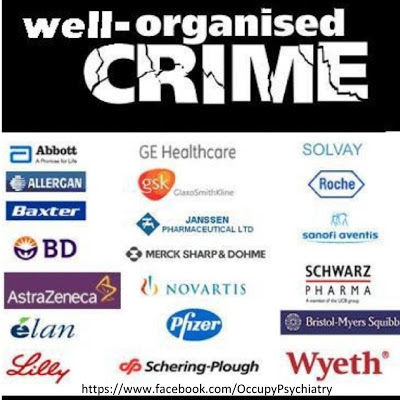 This is the most difficult and most heartfelt radio interview I have ever conducted. I talk with the surviving wife and the surviving mother of Tony Orban, an outstanding soldier and police officer driven to tragic violence and then to suicide by the antidepressant Zoloft (sertraline). As Tony’s medical expert I grew to know and to care about him and his family. A poignant reminder of the human cost of violence induced by psychiatric drugs.

Paragraph 21 reads:  "Orban also told police that he had taken two anti-depressants that morning, Zoloft and Neurontin, before spending the hours leading up to attack drinking beer and margaritas with his old friend, Jelinek."

The VA is more dangerous than a battle in Iraq.

(MOLALLA, Ore.) - It appears that battle veterans are getting it in the neck again (I'm saying this because this is a family Website).

Around June 1st 2008, The Charleston North Carolina, Gazette newspaper reported four battle veterans with PTSD dying from prescriptions given them by VA clinics. The medications wrere Paxil, Klonopin and Seroquel.

The father of one of the victims, Stan White, researched this and found eight more dead victims in the Kentucky, Ohio and West Virginia area. This doesn't seem to bother the VA but we/somebody should question on what is going on. As a physician/pharmacist and victim of VA hospital medical abuse, I think I know what is causing these deaths and I believe these reports are the "tip of the iceberg". Whoever is "taking care" of these battle veterans and I believe it is psychologists or social workers rather than physician/psychiatrists.

Therein lies the problem. A medical adage is, if one pill doesn't work, take two and if that still doesn't work take more ir add a similar medication. This is standard operating procedure (SOP) in the VA rather than good medical care. The combination can be/is lethal.

The deaths of those 12 veterans should be a red flag of danger but I suspect VA psychologists are color blind also.

The article in the newspaper brought about 17 letters to the editor which indicate the readers know more than the VA caretakers.

one writer wrote "Seroquel turns one into a zombie". A physician, Dr. Ann Blake Tracy wrote "two of this type of drug should never be given together." She questions the rationale of the "doctors".

Another mother wrote of her son's death from Zyprexa v which is in the same family.

Another wrote of the recent article that anti-depressants don't work. Another relates the same of Progentin which was pulled from use.

It is time for a real evaluation of VA treatment for PTSD battle veterans. Although they represent less than one percent of the population, they produce 20 percent of the deaths by suicide- multiple tragedies.

Yes, treatment by the VA is far more dangerous than combat in Baghdad. Hoorah and blessings to my brothers in the Infantry.

As a final statement, my 400+ Vietnam Veterans say marijuana works better (and safer) than ANY of the above drugs. More information on the history of Leveque can be found in his book,General Patton's Dogface Soldier of Phil Leveque about his experiences in WWII.Order the book by mail by following this link: Dogface Soldier.
If you are a World War II history buff, you don't want to miss it.


Dr. Breggin says: This is the most difficult and most heartfelt radio interview I have ever conducted. I talk... fb.me/2Y0bWroUs
— Ginger Breggin (@GingerBreggin) March 6, 2013