Annual Protest of the American Psychiatric Association May 4, 2014, NYC

Invitation to the Annual Protest of the American Psychiatric Association May 4, 2014, NYC 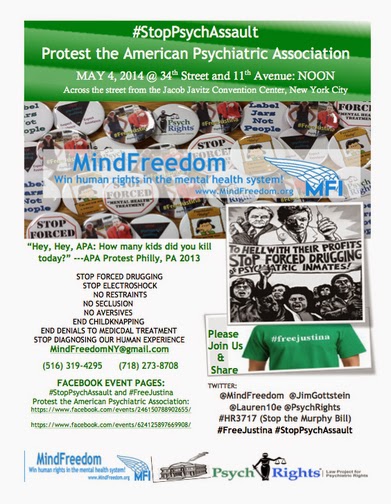 #StopPsychAssault; #FreeJustina; and #StopMurphyBill:
MEDIA ADVISORY
April 26, 2014
Contact: Lauren Tenney, PhD, MPhil, MPA, Psychiatric Survivor
Phone Number (516) 319-4295
https://www.facebook.com/events/246150788902655/.
https://www.facebook.com/events/624125897669908/
WHO: People everywhere. MindFreedom International and the Law Project for Psychiatric Rights (PsychRights®)
WHAT: Annual Protest of the American Psychiatric Association’s Annual Meeting and the #StopPsychAssault; #FreeJustina; and #StopMurphyBill Twitter campaigns
WHERE: Behind the barricades on the Corner of 34th Street and 11th Avenue, NYC, NY (Across the Street from the Jacob Javits Convention Center) on the Internet.
WHEN: May 4, 2014 @ NOON
WHY: An invitation to protest the American Psychiatric Association. Everyone is at risk.
James B. (Jim) Gottstein, Esq., President/CEO of the Law Project for Psychiatric Rights, is traveling from Alaska to attend the protest in New York City on May 4, 2014. Gottstein stated: "Psychiatry is a morally and scientifically bankrupt enterprise causing great harm and must be held accountable."

Al Galves, PhD and Board member of MindFreedom International stated:
“If you believe, as I do, that our mental health system is hurting rather than helping people who are going through hard times, then the place to protest is at the annual convention of the people who control mental health treatment in our country – the psychiatrists.”
Dorothy Dundas, who is affiliated with National Coalition for Mental Health Recovery,and the creator of the “Behind Locked Doors” poster, will be traveling from Massachusetts to attend the protest. Dundas stated: “As a survivor of forced shock, seclusion and drugging, the Murphy bill would take us back 30+ years! STOP the Murphy bill!”
It is crucial that we come together and say #StopPsychAssault, #FreeJustina, and #StopMurphyBill at the Annual Protest of the American Psychiatric Association. If you cannot come to the protest in person, please post your letters of protest on these event pages:
https://www.facebook.com/events/624125897669908/ and
https://www.facebook.com/events/246150788902655/.
Your written protests will be compiled and given to the APA and the MEDIA.
DETAILS: Photo/Video Opportunities
SPONSORING ORGANIZATIONS:
MindFreedom International and the Law Project for Psychiatric Rights
BACKGROUND INFORMATION:
MindFreedom International www.MindFreedom.org
MindFreedom International is a nonprofit organization that unites 100 sponsor and affiliate grassroots groups with thousands of individual members to win human rights and alternatives for people labeled with psychiatric disabilities.

MindFreedom Mission Statement
"In a spirit of mutual cooperation, MindFreedom leads a nonviolent revolution of freedom, equality, truth and human rights that unites people affected by the mental health system with movements for justice everywhere."
Law Project for Psychiatric Rights www.PsychRights.org
The Law Project for Psychiatric Rights (PsychRights®) is a public interest law firm whose mission is to mount a strategic legal campaign against forced psychiatric drugging and electroshock in the United States akin to what Thurgood Marshall and the NAACP mounted in the 40's and 50's on behalf of African American civil rights. The public mental health system is creating a huge class of chronic mental patients through forcing them to take ineffective, yet extremely harmful drugs.
Currently, due to the massive growth in psychiatric drugging of children and youth and the current targeting of them for even more psychiatric drugging, PsychRights® has made attacking this problem a priority. Children are virtually always forced to take these drugs because it is the adults in their lives who are making the decision. This is an unfolding national tragedy of immense proportions. As part of its mission, PsychRights® is further dedicated to exposing the truth about these drugs and the courts being misled into ordering people to be drugged and subjected to other brain and body damaging interventions against their will.
#FreeJustina http://justiceforjustina.com/
Justina Pelletier is but one example of a young person who is currently knapped by psychiatry. Justina is imprisoned in a psychiatric institution and barred access to her family. Justina's family has broken legal gag orders preventing them from speaking about what is happening to Justina, to bring attention to the fact that Justina is being tortured while true medical treatment is being withheld from her.