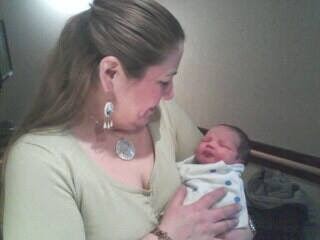 me and my grandson, Ragnar

March 14, 2014 | Psychopharmacology, Mood Disorders
By Marlene P. Freeman, MD
DISCLOSURES
Dr Freeman is Associate Professor of Psychiatry at the Harvard Medical School; Medical Director, Clinical Trials Network and Institute; and Director of Clinical Services, Perinatal and Reproductive Psychiatry Program at the Massachusetts General Hospital in Boston. She has received research support from GSK and Lilly; is on the advisory boards of Lundbeck, Taleeda, Otsuka, and Genentech; and does medical editing for DSM Nutritional Products. (emphasis mine)

an excerpt:
"For some medications, such as SSRIs, lamotrigine, and benzodiazepines, there are a great number of published studies—some with conflicting results.7 For other medications that are known teratogens, such as lithium and valproic acid, the association with birth defects is clear, but the absolute risk of teratogenicity must be understood to make informed decisions.7 With lithium, which has a known association with a specific cardiovascular malformation—Ebstein anomaly—the absolute risk is low. Approximately 0.1% to 0.2% of pregnancies are affected when there is exposure in the first trimester. In contrast, valproate has a known and common association with neural tube defect, estimated to occur in 1% to 5% of exposed pregnancies.7 "

Dr. Freeman's article does not even mention neuroleptic drugs, called antipsychotics, which are direct to consumer marketed in the United States as adjunct treatment for mood disorders; this may have been an oversight. It appears to reflect a head in the sand approach to the elephant in the room. Some of Dr. Freeman's statements that appear to undermine FDA warnings about the teratogenicity of FDA approved drugs is, in effect, basically a declaration that the elephant the good doctor is pretending no one sees can't possibly be dangerous; if it is, the elephant is not as dangerous some know it is.

I don't tend to put much stock in doctors who fail to communicate in a forthright manner. Perhaps I am being harsh, but I don't believe so. A doctors stock in trade is a patient's perception of the doctor, and the real world effect on the patient (from the patient's perspective). It is important for a doctor to be HONEST. Psychiatrists cannot mislead through use of analogies and myths to explain psychiatric diagnoses are "real diseases"; label people who don't trust them with anosognosia, having no respect for authority, paranoid or delusional while simultaneously endorsing forced treatment under color of law on unwilling patients. Involuntary treatment is justified solely by professional opinion. In effect, by stating the person has a psychiatric diagnosis and that it is a "medical necessity" the person must have psychiatric treatment. The Rules of Evidence are not required or followed in the civil commitment process in Washington State. No evidence of the "medical necessity" of psychiatric treatment, no evidence that a patient has an identifiable neurobiological condition or a brain disease; and worse, no evidence that psychiatric treatment will benefit the patient forced under color of law is even required.

Whether a patient believes a professional is communicating honestly with them, is perceived to have a genuine kind regard for them, and has the ability to treat a patient ethically, is not as important as the psychiatrist being humble and honest enough to practice medicine with ethical integrity. A doctor's primary duty ethical duty is to the patient; regardless of a psychiatrist's biases and beliefs about what causes "mental illnesses," and how to best help the people who are believed to have a psychiatric diagnosis. While it is unfortunate and "challenging to remain apprised of data pertaining to medication use in pregnancy, since the literature is constantly evolving;" it is more unfortunate that there has been so little evidence offered to validate or support psychiatric diagnoses and treatment.

Why are psychiatrists emotionally defending psychiatric diagnoses and the psychotropic drug treatment regimens that purportedly medically treat them?  Ethical integrity demands psychiatric diagnoses and drug treatment algorithms be empirically validated and supported; not merely believed in and relied upon by consensus. In effect, psychiatry has developed standards of care that protect psychiatrists from being held legally liable for iatrogenic harm caused to patients. The purpose of treatment standards is to protect patients from unethical medical practitioners; why are treatment standards used to refute accusations of iatrogenic harm? Psychiatry's treatment standards serve as a protective legal shield for psychiatrists professionals who wield Police Powers to detain and involuntarily treat patients with drugs  and/or electroshock treatments with serious risks including permanent disability and death. Since psychiatrists are doctors we must believe they are honest, ethical and NO EVIDENCE IS REQUIRED.

Adequate treatment of depression during pregnancy is very important for maternal, fetal and neonatal health. Selective serotonin reuptake inhibitors (SSRIs) are commonly used antidepressants. According to one American study, approximately 7% of pregnant women were prescribed an SSRI in 2004-2005. First trimester use of SSRIs, as a group, is unlikely to increase the risk of congenital malformations. Paroxetine may be associated with a small increased risk of cardiac malformations, but evidence remains inconclusive. Fetal exposure to SSRIs closer to time of birth may result in respiratory, motor, central nervous system and gastrointestinal symptoms in about 10% to 30% of newborns (SSRI neonatal behavioural syndrome). These symptoms are usually mild and transient. Persistent pulmonary hypertension of the newborn is an extremely rare consequence of fetal exposure. This information should be used to make individual risk-benefit decisions when considering the treatment of depression during pregnancy. Newborns with late- pregnancy exposure to SSRIs should be observed in hospital for at least 48 h. read here