WE as a Nation need to do better by our Veterans of Afghanistan and Iraq! The Mental Health field is in a freaking mess. Children, the elderly and military troops and veterans are especially vulnerable to being harmed and killed by mental health professionals using "standard practices." Prescribing psychotropic drugs with serious risks, but without evidence that supports the need or the utility for the prescription; little to no proof that the drug/s prescribed will actually help the patient. There is however ample evidence that prescribing psychotropic drugs in this manner will cause a significant percentage of patients iatrogenic injuries and diseases; and may cause a life-threatening adverse reaction like akasthisia which can compel a person to commit suicide, and or homicide. It is not at all a medically sound or an ethical decision to indescriminately drug physically healthy people in distress knowing that doing so may cause them metabolic, cognitive, neurological, and cardio-vascular diseases; knowing there is a risk that doing so can cause them to become suicidal, and maybe homicidal.  These are not the type of risks one can determine  are "acceptable risks" for another person without both being aware of the potential risks and hoped for benefits; nor can a prescriber ethically determine that the negative effects a patient experiences are "tolerable" to the patient.

Research fraud, illegal marketing, hidden trial data, Medicaid, Medicare and TriCare fraud, and good old fashioned greed this is what fuels the widespread use of psychotropic drugs for every symptom of distress,  discomfort, and behavioral issue---whether it is the patient who is wanting treatment or it is someone else who believes the problem resides within the patient. The reality is, regardless of what the cause/s ultimately are, how we treat one another is, in my mind, the single most important environmental factor that we can change, adapt, to positively influence our individual and collective wellbeing. That's why it always matters. In my experience, it matters very much more to people who have a psychiatric diagnosis because of the sensitivity to all of our energy, attitude and actions. One thing absolutely clear to me is that humans in distress know when they are disrespected, misled, coerced, manipulated and lied to...Humans are meant to survive, and coercing and misleading and lying to a person who may be perceived by others as being out of it or in another world, or just not seem to be aware of the same reality as anyone else in the room; I know that in that state, we know whether we are treated with respect or callous disregard, with acceptance and positive regard or with fear and dirision. How we treat one another really, really matters. All the time.

Under the guise of "practicing medicine," psychiatry has been using the same tactics that it has always used---coercion, manipulation, and misinformation; what is utterly horrifying is despite the lack of evidence which complies with the Rules of Evidence for Standard civil and criminal court hearings, (which is why the legal  standards had be lowered for civil commitments) psychiatry has Police Powers to detain, diagnose and treat people Under Color of Law. The ethically bankrupt "doctors" have taught families and firends to be their accomplices coercing, emotionally manipulating and effectively stimatizing people with a psychiatric diagnosis whom they have legally stripped of their individual rights by passing laws which in effect allow people with a psychiatric diagnosis to be treated as if they are less that fully human and not worthy of having their basic human rights respected. It is unconscionable how can anyone reasonably believe that stripping people in distress of their human dignity, their political power and their fundamental human rights, and using  different (lower) standards, to legally force them to comply with psychiatric diagnosis and treatment is "for their own good"? what kind of shit is that!? How could it be ethically, medically or legally justified? It is contradictory to ethical, medical and legal standards.

Based on carefully crafted misinformation and innuendo used to incite fear and feed innate biases, the stima of mental illness has come to be a justification for shameless bigotry that is basically accepted as "necessary" to be of benevolent assistance to "the seriously mentally ill?!"  This is now the societal norm in the Land of the Free and Home of the Brave that by incessantly repeating misinformation, etc.; i.e. use of propagnada, most states have passed unconstitutional laws which violate individual Constitutional Rights to Substantive and Procedural Due Process of Law of people to ensure they get special treatment that is known to be minimally effective for a minority of people the laws are meant to be applicable to; yet have grave risks including fatality for all who take them. In "Mad In America," Robert Whitaker reported that 1 out of every 145 people in the drug trials for Zyprexa, Risperdal, Seroquel, and Serdolect died.  That's a lot---and the adverse effects are more profound for kids and adolescents.  1 out 116 or 119 (depending on who the lead author is on the "peer-reviewed" article) in the TEOSS trial died.

The current forced treatment laws are the brain child of Edwin Fuller, Torrey Director of the Treatment Advocacy Center, the "research" organization for NAMI, either that or being the fromt man is also one of his roles...TAC's forced treatment agenda has been marched across the nation by NAMI. NAMI trains "advocates" to lobby state legislatures. Involuntary Treatment legislation has been passed in 46 States, thanks to NAMI's special interest lobbyists funded and "educated" by pig pharma.

By using propaganda to fuel fear, ignorance and bigotry this effort uses advocacy groups and massive amounts of cash to spread a distorted message about psychiatric diagnoses and the people who have been labeled as "mentally ill." Torrey believes cat feces cause schizophrenia and he also collects human brains--- sometimes by using less than ethical, honorable, or legal  means... The Brain Collector, since becoming a beneficiary of the Stanley Family's generosity, was gifted with a faculty position at the The Uniformed Services Medical Sciences University; has founded the Treatment Advocacy Center; and "founded" the  Stanley Medical Research Institute. These latter two endeavors have received over $300 million from the Stanley Family Foundation in 21 years.....that's a pretty generous marketing budget for a propaganda campaign for a social and political control system for those who are "in need of treatment." Diagnosis by psychiatry has led to thousands being prescribed drugs without being adequately informed about what the risks of taking the drugs are.

Those on Medicare, Medicaid, and TriCare are targeted because these Government programs cover the cost--it is the source of a significant percentage of the billions of dollars of fraud over the last 10+ years and the fraudulent payment for non covered prescriptions, is still unabated...Medicaid paid fraudulent claims for my son's "off-label" prescriptions every time, without question.  It is an enormous betrayal of trust. I was never told even half of what I shold have been from the beginning---I didn't realize how very badly I had been betrayed and start researching until it was  too late. Every single social system  regulatory, medical, mental health, or social services failed to comply with the Law the ethical guidelines of their chosen professions and some treated us as if we were not worthy of any respect or even civility. I am appalled at the amount of money defrauded from my neighbors and my family members, to pay for what was done to my son.

Thanks to the lack of accountability and the deceit that permeates meant health services due to the use of coercion, etc. so called professionals know that forgery, perjury, and psychiatric assault are not ever investigated, so they too, can be standard practices... A "Designated Mental Health Professional," has the state's authority to "detain" a person for "treatment." The DMHP does not have to be a psychiatrist, and does not need to know anything at all about the person they are evaluating. The Courts and the Police now function as mental health treatment aides or medical tools enforcing the mental health treatment protocols without an evidence base which suppports the protocols from being "standards" at all. . How is this any different from what was done in Germany by the Third Reich?  It's not a bit different.

Direct to consumer marketing of drugs; drug industry funded "consumer advocacy and education" campaigns, biased research is conducted by psychiatrists who lack medical ethics, drugs approved by this process are then illegally marketed; it's "standard practice."   The regulatory system failure and propaganda campaigns with false claims about the safety and effectiveness of the drugs being illegally marketed; while presenting hypotheses as medical certainties and validated scientific findings, which serves to fuel society's ignorance and fear; which results in a dysfunctional, inhumane response to people who have a psychiatric diagnosis.

"New statistics from the VA show that veterans make up 20 percent of the 30,000 suicides in the United States each year. An average of 18 veterans commit suicide every day and five of those 18 are already getting treatment at the VA. "Veteran's Suicide: Problems in the VA" 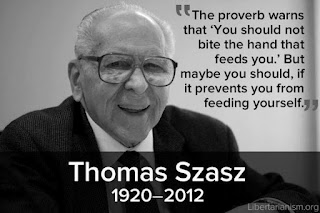 Although we may not know it, we have, in our day,
witnessed the birth of the Therapeutic State. This is perhaps the major
implication of psychiatry as an institution of social control.
--Thomas S. Szasz, Law, Liberty, and Psychiatry:
An Inquiry Into the Social Uses of Mental Health Practices,
The Macmillan Company, New York, 1963,
from the: The Thomas S.Szasz Cybercenter for Liberty and Responsibility